What You Think You Know (but Don't) About Food 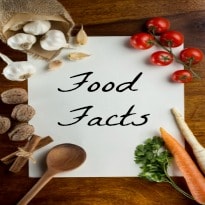 Calling all foodies! We've rounded up ten facts that'll make your eyes roll back within your head.

1) Smelling bananas can help you lose weight. A study conducted at Smell & Taste Treatment and Research Foundation showed that people who smelled bananas lost more weight than those you didn't. It was found that 'neutral' sweet smells can help curb appetite and hunger. Therefore, even foods like green apple, vanilla or peppermint could work.

3) In Japan, they sell square watermelons. And that's because they stack better! While the watermelon is still small, it is placed in a square glass box and it acquires the shape as it grows.
Image via Imgur.com
4) Onions, apples and potatoes all have the same taste. The difference in flavor is due to their smell. In case you don't believe us, pinch your nose and bite in. They will all taste sweet.5) Honey never spoils. You can eat 1000-year old honey. In fact, scientists have found edible honey in various Egyptian tombs. The acidic nature, presence of hydrogen peroxide and the lack of water make it last forever.

6) Eating with your left hand will make you eat less.  A study conducted at University of Southern California shows that switching the hand you eat with will make you consume less and curb calorie consumption.

Listen to the latest songs, only on JioSaavn.com
7) Old paper smells like vanilla. Trees contain a compound called lignin which goes into making paper.  When paper is left to sit around for a while, the lignin breaks down and gets converted in vanillin, a chemical also present in vanilla beans. This emits a sweet smell with hints of vanilla.

8) The 'Guinness Book of World Records' lists a whole stuffed roasted camel as the largest food item on a menu. It is a traditional Yemeni Bedouin wedding dish, savoured by sheikhs and their family members.  The best part -the camel is stuffed with lamb, which is stuffed with chickens, which are stuffed with fish and that is stuffed with eggs. Breathe in, breathe out!
Image via Pinterest/ MSN News
9) Apple seeds are poisonous. They contain a compound called amygdalin, which on being chewed releases cyanide (in small amounts) when combined with digestive enzymes. Swallowing a few seeds may have no effect as you are protected by the hard seed coating. But, chewing up a handful of these seeds may pose a health risk.

Comments10) Eating a polar bear liver can be fatal. In the Artic regions, people actually consume polar bear meat but avoid eating the liver. It contains very high levels of retinol and it has been found that humans can't handle that much vitamin A.