10 Things You Didn't Know About Coffee 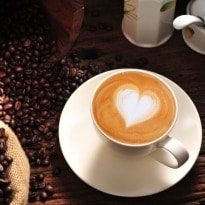 Whether it's a latte on the way to work or an espresso to get through the afternoon slump, coffee has become a routine formula for several youths. However, think twice before sipping on it as it can also have some side effects.

Health guidelines recommend a maximum of 400 mg of caffeine per day, but as there is caffeine in tea, chocolate and fizzy drinks as well as coffee, the intake often turns out to be more than required, reports femalefirst.co.uk.

*It can be bad for your heart: Some studies show it can reduce blood flow in your coronary arteries when you need it most - during exercise, as well as cause palpitations or irregular heartbeat and may possibly increase your blood pressure over time.

* It disturbs your sleep: People who drink more than three cups of coffee per day are scientifically proven to have less than restful sleep. One study showed a difference of 79 minutes of sleep between drinkers of caffeinated vs decaffeinated drinks. If you struggle to get to sleep, then caffeine should definitely be a no-no.

* It's often linked with sugar. Even if we don't add sugar to our coffee, we are often tempted to accompany it with a biscuit, cake or a breakfast muffin. In addition, there can be 11 teaspoons of sugar in some varieties. The calorie count of these specialist coffees can be huge too, so it's not good if you are watching your weight.

* It's bad for your mood: Caffeine increases catecholamines such as adrenaline, known as the "fight or flight" hormone. No surprise then that caffeine can make you tense and jittery in high quantities.

* It can impact your fertility: Drinking more than five cups of coffee a day can be linked with lower fertility. If you're trying to get pregnant, it's certainly worth cutting down on coffee, and once you are pregnant you'll want to quit caffeine altogether or certainly cut back to less than 200 mg per day as it may increase the risk of birth defects or reduce fetal growth.

* It can improve sports performance: Drinking a caffeinated drink before a sport is associated with improved endurance and other sporting measures. It seems that caffeine increases heart rate but reduces the pain felt during exertion, encouraging us to push it that bit further.

* It can increase mental alertness: Studies performed on people in stressful conditions showed improved concentration, learning and reaction time after 200 mg caffeine. In addition, there is some evidence that it can delay onset of Alzheimer's disease.

* It may protect the liver: Fatty liver disease is becoming an increasing problem due to the combination of alcohol and obesity. Excess fat in the liver can cause inflammation and lead to cirrhosis. Some studies show that caffeine intake may be associated with a lower risk of fatty liver.

Comments* Caffeine can cheer you up: Even just the smell of coffee can make you feel better and drinking it too is related to lower rates of depression. Not to mention the social element of relaxing with friends over a cuppa!