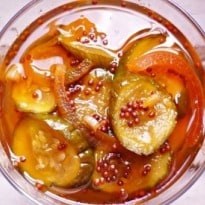 Cucumbers rot faster in fridges, so rescue them with a delicious Dinner Doctor Indian salad or creamy strawberry sandwiches

I don't think I have ever used up an entire cucumber, even when I have bought just half of one. Some kind of unwritten law means I'll inevitably find some gnarly piece of cucumber with plastic shrink wrap lurking in the salad drawer, like some deep sea creature thriving in the dark and under high pressure conditions. Once brought into the light of my kitchen it usually implodes under the change of pressure; I am left with a squish of green skin and a mess of liquid insides.

Apart from blaming my slatternly housekeeping skills and poor memory, I had also tended to blame the cucumber's deterioration on the way it had been handled, often covered with plastic shrink-wrap. Turns out that this is one of those occasions where it wasn't the plastic's fault. In fact we have been storing cucumbers in completely the wrong way. Research at American university, UC Davis, shows that cucumbers will actually last longer if stored at room temperature. Cucumbers, like tomatoes, are very sensitive to cool temperatures, which speeds up their deterioration.

They really are sensitive little things, not just to temperature but to things such as ethylene gas; keep them away from bananas, melons and tomatoes, as they are emit ethylene, which causes the cucumbers to ripen further and deteriorate.

That cucumbers can be indigestible seems to be a given. Apparently some people are sensitive to the compound cucurbitacin in cucumbers. I am no exception to that. What there seems to be some confusion about is how to avoid this side effect, apart from not eating cucumbers in the first place, which seems a bit harsh. Some recommend removing the skin. Personally, I think the skin is the best bit of the cucumber, where most of the flavour resides. So unlike tomatoes, in which the seeds pack lots of flavour, I always deseed my cukes. In my less-than-scientific opinion, it is the watery seeds that make you burp. Removing the seeds improves the texture by reducing the amount of liquid in chopped cucumber; salads made with de-seeded cucumbers stay fresher for longer.

It is said that the English summer is not complete without strawberries, that a traditional British tea party incomplete without elegant cucumber sandwiches. Personally, I like to combine the two as I think strawberries and cucumbers bring out the best in each other. Layer thin slices of both cucumbers and strawberries with a little (or a lot) of cream cheese and you have a dainty sandwich perfect for a summer tea party.

Slice the cucumbers as thinly as you can. Press a small cookie cutter into each slice to remove the seeds and discard.

Lightly coat each slice of bread with cream cheese.

Top one slice with circles of cucumber and then strawberries. Top with the other slice.

You could add some fresh herbs such as a basil leaf, mint or even a borage leaf, for extra cucumber flavour.

I used a cookie cutter to cut rounds from the bread slices. Yes, this does seem extravagant. But I needed to make breadcrumbs for something else I was making that day, so it was a win-win situation.

These sweet and crunchy pickles are very easy to make. Just half a cucumber made enough to fill a 400ml jar. It might seem too much effort for just one jar, but if you have never made pickles before, this is a good recipe to see if you like them or not.

Wash and thinly slice the cucumbers (about 5 millimetres thick).

Combine the cucumbers and onion in a bowl and sprinkle over the salt. Cover with a clean tea towel and leave in the fridge for at least 3 hours.

Drain the vegetables and rinse well. Leave to drain, pressing down to remove any excess water.

Combine the vinegar, sugar and spices in a non-reactive stainless steel saucepan. Gently heat, stirring occasionally until the sugar has dissolved.

Add the drained vegetables and bring to the boil. Simmer for about 1 minute.

Remove the vegetables (with a slotted spoon) to the sterilised jar.

Gently simmer the remaining syrup for about 5 minutes until the liquid has slightly reduced.

Pour the liquid over the vegetables in the jam jar.

Cover with a suitable (plastic-lined) lid.

They are ready to eat within a day and will store in the fridge for about 3 weeks.

This koshimbir, a type of raw chutney from the Maharashtrian region of India is full of sweet, tart and spicy flavours, typical of the region. The dish is often served with a thali (a mixed plate of dishes), but personally I could just eat it straight from the bowl, with just a spoon ... for one.

Put the cucumber, chilli, lemon juice and sugar in a bowl. Stir well to combine.

Sprinkle the roasted peanuts and coconut over the cucumber and lightly combine.

Heat the oil in a small frying pan. When the oil is hot, add the mustard seeds, which should immediately start to pop. Now add the cumin seeds. Fry for another 30 seconds or so. Turn off the heat.

Pour the spiced oil over the salad and toss again.

Check the seasoning. Adjust salt or sugar to suit your taste.

For such a relatively small amount of coconut, I buy the snack pots of coconut pieces that you can get in supermarkets. They are perfect when you want a small amount of fresh coconut, but don't want to buy the whole shell. While you won't be able to grate the chunks of coconut as they are too small, they can be easily chopped in a blender.

4. Other recipe ideas for leftover cucumber:

I really wanted to find a really good historic British recipe using cucumber, notwithstanding that in the 17th and 18th centuries, they were generally thought to be poisonous or only fit for cattle fodder (hence the name "cowcumbers"), but by the Victorian era and early 20th century the British were frankly committing crimes against the blameless cucumber. The idea of boiling a cucumber and serving in a white sauce, beloved of some of my older cookbooks is one that I find really unappealing. However, in 1925 Hilda Leyel in The Gentle Art of Cookery came up trumps by suggesting chunks of cucumbers, dipped in seasoned breadcrumbs and fried. Which sounds suspiciously like the American "frickle" (fried pickle). Sadly Leyel rather lets the side down by suggesting serving hers with bread sauce. I'd just have mine with a cold beer!

5. Rupert Kirby of Casa Rosada has tweaked the classic vichyssoise soup by adding refreshing lemongrass and coriander to his cold cucumber soup.

8. Cookie and Kate's refreshing cucumber and mint gimlet is the perfect cocktail on a hot summer's day.

9. Hugh Fearnley-Whittingstall naturally has loads of ideas for using up cucumbers. What about his delicate cucumber with sorbet? Apparently the Pimms is optional. As if!

10. A cooling Turkish cacik is a simple dipping sauce of cucumber and yogurt, which is very nice with lamb burgers or even a smoked salmon sandwich.

11. For something a bit spicy try Diana Kuan of Appetite for China's pork and cucumber stir fry. She also has a great recipe on her website for a Sichuan spicy cucumber salad, which is probably not for the faint-hearted!

13. Camilla Hawkins of Fab food 4 All makes this spicy but creamy Spanish-style chilled soup with cucumber and tomato, full of the flavours of sunshine.

15. If you love Korean kimchi, but don't want to go through the whole faff of fermenting it, try this seasonal cucumber kimchi from food historian Laura Kelley, (although you will have to reduce the quantities as she makes a vast amount!)

16. A quick Asian-style pickle is the perfect accompaniment to Malaysian chicken satay.

17. Amy Sherman of Cooking with Amy makes this delicious fruit salad of mango and cucumber.

18. The Guardian Cook section's 10 best salad drawer recipes has some corkers that use a little cucumber, but the one that really grabbed my attention was Michael Mina of Cook Taste Eat's clever chargrilled cucumber salad recipe.

19. For more information about cucumbers, check out the Cucumber Growers' website - full of useful information and lovely recipes.

20. And if none of that inspires you, why not try a few life hacks with cucumber ...

So how do you like your cucumber? A cooling raita, tzatziki or a yogurt and cucumber soup? Would you cook your cucumbers or leave them raw? Do you make your own sushi or add cucumber to a classic Pimms cocktail? Or do you, like some fanatics, prefer your delicate cucumber with a hefty hit of Marmite?