3D-printed pasta - the shapes of things to come? 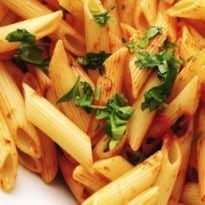 Once, not so very long ago, the pasta of Italian dreams was kneaded, rolled and shaped by hand in the kitchen. Now, though, the world's leading pasta producer is perfecting a very different kind of technique - using 3D printers.

The Parma-based food giant Barilla, a fourth-generation Italian family business, said on Thursday it was working with TNO, a Dutch organisation specialising in applied scientific research, on a project using the same cutting-edge technology that has already brought startling developments in manufacturing and biotech and may now be poised to make similar waves in the food sector.

Kjeld van Bommel, project leader at TNO, said one of the potential applications of the technology could be to enable customers to present restaurants with their pasta shape desires stored on a USB stick.

"Suppose it's your 25th wedding anniversary," Van Bommel was quoted as telling the Dutch newspaper Trouw. "You go out for dinner and surprise your wife with pasta in the shape of a rose."

He said speed was a big focus of the Barilla project: they want to be able to print 15-20 pieces of pasta in under two minutes. Progress had already been made, he said, and it was already possible to print 10 times as quickly as when the technology first arrived.

According to reports, Barilla aims to offer customers cartridges of dough that they can insert into a 3D printer to create their own pasta designs.

But the company declined to give further details, dismissing the claims as "speculation". It said that although the project had been going on for around two years, it was still "in a preliminary phase".

When contacted by the Guardian, TNO said media interest in the project had spiked in recent days, and it declined to make any further comment on the nature of the project.

The technology of 3D printing is advancing in myriad sectors around the world. Last year a California-based company made the world's first metal 3D-printed handgun, capable of accurately firing 50 rounds without breaking, and scientists at Cornell University produced a prosthetic human ear.

At the Consumer Electronics Show in Las Vegas this week, the US company 3D Systems unveiled a new range of food-creating printers specialising in sugar-based confectionary and chocolate edibles. Last year Natural Machines, a Spanish startup, revealed its own prototype, the Foodini, which it said combined "technology, food, art and design" and was capable of making edibles ranging from chocolate to pasta.