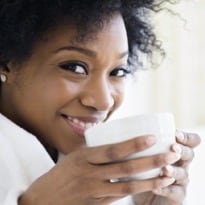 Very little in life can't be improved with a hot drink. They can warm us or cool us down. They help numb pain when we're ill. They even help us see the best in other people

Few situations aren't vastly improved by putting the kettle on. The phrase alone is almost as soothing as the resulting drink: an invitation to sit down, talk and put off whatever trials lie ahead. Hot beverages are relied upon for waking up, punctuating workdays, gaining favour, welcoming home, relieving poorliness and lulling to sleep. They can be cheering, reviving, relaxing, cooling (if you're hot) and warming (when you're cold). And they soften the pace of life. You can't guzzle a hot drink, it has to be taken slowly (making it the perfect way to measure out breaks), and while you're sipping and blowing and waiting for that optimum comfortable drinking temperature, you can inhale and warm your nose with the aromatic vapours.

Holding a hot drink can even make you friendlier. An experiment conducted at the University of Colorado Boulder, published in the journal Science, found that "participants who briefly held a cup of hot (versus iced) coffee judged a target person as having a 'warmer' personality (generous, caring)". These people were asked to hold a hot coffee or an iced coffee belonging to someone before being introduced to them - they had no idea that holding the drink was even part of the test. And the results were just as the researchers had hypothesised, partly based on a body of research into the significance of the insula being the part of the brain in which judgments about others are formed, and also where we process warmth, as in the agreeable temperature range. A person's perceived warmth of character, along with their competence, says the study, "accounts for a large proportion (82%) of the variance in people's evaluations of social behaviours". Psychologists also reckon the effect is to do with positive associations from early parental warmth and its associated nourishment; it could even be a womb thing. Hot drinks run deep.

Imbibing hot liquid can be cooling and warming. If you're hot, it may warm you up a little, but when it reaches thermosensors in the oesophagus and stomach, these react as though the entire body is as hot as the drink, and turn up the sweat flow so much that, provided your clothing allows it to evaporate, you'll end up cooler than when you started. Or, at least, this was deemed the most likely explanation for this effect in a study by Anthony Bain at the University of Ottawa's Thermal Ergonomics Laboratory. Conversely, if you're chilly after sitting still for hours on end, grabbing a tea to warm your cockles is an obvious solution. "When already cold," says Bain, "it is unlikely that the hot drink will warm you beyond the threshold to elicit sweating - so the drink will mildly warm you."

Professor Ron Eccles is the director of the Common Cold Centre at Cardiff University. You will have read about his work before because everyone's obsessed with beating colds. In 2008, he decided to study the effect of hot drinks on colds. He gave bunged-up sufferers cups of either hot or room temperature Robinson's apple and blackcurrant cordial. "What surprised us," says Eccles, "was how effective the treatment was. Both drinks were beneficial, but the hot drink was much more beneficial."

It provided "immediate and sustained" relief from coughing, sneezing, runny nose, sore throat, chilliness and tiredness and the subjects even reported a significant improvement in nasal airflow. But when Eccles's team measured nasal airflow, they discovered that it remained unchanged. "Remember," says Eccles, "symptoms are what we feel, and what we feel can be influenced by our mood, our expectations, our culture, all sorts of things." But there were, he suspected, physiological effects, too. For example, the sweet taste was stimulating receptors in the mouth that, he says, "are well documented in the literature to influence both the sensation of pain and the sensation of cough". This is to do with taste nerves and cough nerves entering the brain stem around the same point, and because sweet taste releases morphine-like compounds in the brain. But what gives the hot drink an advantage in this respect is that taste is enhanced by heat. The taste receptor that picks up sweet, bitter and umami tastes sends a stronger electrical signal to the brain when food or drink is warmer.

One clear signifier of humankind's emotional dependence on hot drinks is the ubiquity of the special mug. We become attached to our own drinking vessel of just the right degree of chunkiness, weight, feel and hue, although heavier crockery generally makes its contents more satisfying. "It seems people conceptualise their internal mental worlds by analogy to the physical world," says Betina Piqueras-Fiszman, assistant professor at the Marketing and Consumer Behaviour department at Wageningen University in the Netherlands. "For example, in one of my studies, people expected to feel fuller when holding a heavy versus a lighter bowl, containing exactly the same amount (and type) of yoghurt." This explains why I am surgically attached to my mammouth china tankard. The day it went missing in the office, I was so upset I went on strike and sent out one of those pathetic rabid global emails about it. Do you have a special mug? Is your life mapped out in hot drinks?