A Masterclass in Northern Italian Recipes 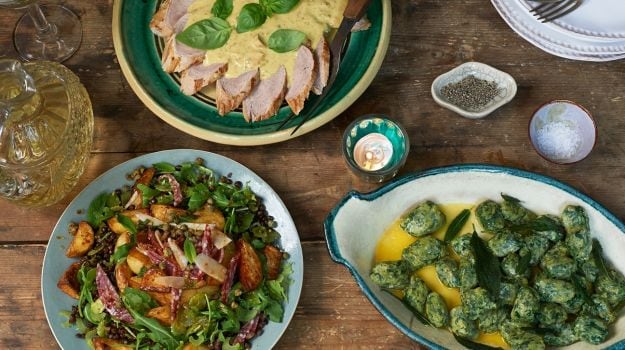 The first of our four-part feast tour begins in Piemonte, with pork tonnato, herby pasta malfatti dumplings and a piquant mostarda potato salad

If cooking is the new rock’n’roll, then Jane, my collaborator on this column, is cooking’s Dave Grohl – famed for her energetic and occasionally injurious performances.

While conducting a cooking demonstration in Italy last year, Jane leapt up on to the stage with such abandon that she tripped over some wiring and fell flat on her face on to the marble floor, fracturing her nose and giving herself two comic-book black eyes.

But Jane is made of stronger stuff than Grohl, who cancelled several shows recently after falling off stage and breaking his leg. Against doctor’s orders, she broke out of hospital that night and was to be found the next day at a local restaurant eating a 23-course lunch. Nothing will keep this woman from her food.

Jane is big in Italy. She is regularly invited there not only to unravel the mysteries of classic British crumble but to teach large theatres of Italians how to cook Italian food. So this week we start Jane’s four-part masterclass on Italian cooking with a northern feast. A super-simple pork tonnato with gnocchi-style spinach dumplings – malfatti (translated as “badly formed”) – and a meaty potato salad with sweet mostarda (mustard-flavoured candied fruit).

1 Sear the pork loin in oil in a hot pan that it will fit in comfortably until browned all over. Remove from the pan and add the stock and veg. Bring up to a rolling boil. Turn down the heat and return the pork to the pan, cover and cook gently over a low heat, turning every 10 minutes, for about 45 minutes or until the meat is firm to the touch. Remove from the heat and allow it to cool in the stock.

2 To make the dressing, carefully place the egg in a pan of boiling water and time it for 2 minutes. Place the anchovies, lemon, capers, garlic and basil in a food processor. Remove the egg from the pan with a slotted spoon. While it is still hot, crack the egg into a bowl and scoop out the insides with a teaspoon. Tip immediately into the food processor and blitz to combine with the other ingredients. Slowly add the oils until you have an emulsion like a thin mayonnaise. Check the seasoning and add extra lemon juice to taste. Break the tuna into small pieces and fold through.

3 Thinly slice the pork when it is cold and arrange on a large plate. Season well. Almost cover with the tonnato dressing and decorate with the extra basil, capers and anchovy.

1 Heat the oil in a large pan and tip in the spinach. Stir well and cover. Leave for a minute and uncover, stir again and cook until the spinach has wilted. Tip out into a colander and press out any excess liquid. Allow to cool. When cold enough to handle, squeeze out any excess moisture and chop the spinach finely. Season well.

2 Tip the spinach in a bowl and add the ricotta, breadcrumbs and parmesan. Mix well. Add the beaten eggs and flour and stir through the mix. Add lots of grated nutmeg and season well.

3 Divide the mix into 4 on a well-floured surface and roll into 4 logs about 2-3cm thick. Chop each log into smaller dumplings (2-3cm; they don’t have to be equal and perfect).

4 Bring a large pan of salted water up to the boil. Drop them into the water and simmer for 2 minutes or until they all come up to the surface. Scoop out and drain well. Transfer to a serving dish and keep warm in a low oven.

5 Make the sage butter by heating the butter in a small pan until it is almost brown. Add the sage leaves and cook gently until they are crisp. Pour this over the malfatti and sprinkle with grated parmesan.

1 Preheat the oven to 200C/400F/gas mark 6. Cut the new potatoes into halves and quarters and toss in olive oil. Season well and roast for 20 minutes until slightly browned. Remove from the oven and allow to cool down to room temperature.

2 Make the dressing by whisking together all the ingredients. Season.

• Henry Dimbleby is co-founder of the natural fast-food restaurant chain Leon. Twitter: @HenryDimbleby. Jane Baxter is a chef and food writer based in Devon. Twitter: @baxcooka