A Type of Beer That Contains No Alcohol? Yes, It Exists!

Traditionally, only fruits were fermented to make fruit beer. Nowadays, many breweries add extract, syrup or processed flavours to the finished product instead of undertaking the process of fermentation. 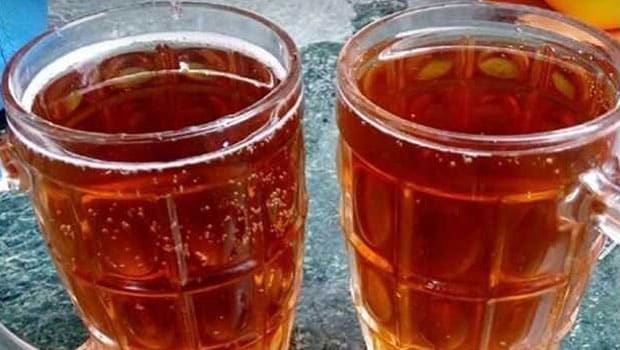 Let's admit it. One of the most crushing childhood revelations for us was probably the fact that fruit beer is not actually beer. As a matter of fact, there happens to be no alcohol content in this fruity concoction! However, that doesn't lessen our love for this cooler. A chilled glass of fruit beer is one of my major motivations (along with piping hot momos) to visit Dilli haat. A fruit beer is a beer made with fruits(as an adjunct) instead of the un malted grains that are used in brewing beer. Traditionally, only fruits were fermented to make fruit beer. Nowadays, many breweries add extract, syrup or processed flavours to the finished product instead of undertaking the process of fermentation.

The beer is meant to be served chilled and it borrows it dominant taste from the fruit used. Like a cherry-based fruit beer, would have the characteristic tarty flavor along with the carbonated fizz you get in the beer. Celebrity Chef Sadaf Hussain, a contestant of Master Chef India 2016, takes us through the history of fruit beer. "If we look back in history, you will find that Neolithic Chinese villagers created a beer like beverage which had honey, rice, and hawthorn fruit and the another reference comes from early Egypt where they used dates and pomegranates in their beer. However, in the modern times, it was Belgium who rebelled and started brewing non-alcoholic fruit beer. It is not really an old concept, and started only in the 1930s with the brewing of the first cherry Lambics and Krieks (types of beer)."

There is a reason why they call this fruity concoction a 'beer'. Chef Sadaf considers fruit beer to be an "unnatural imitation" of beer and tells us, "The non-alcoholic beer actually starts out as normal beer. Malt gets mashed and boiled with hops and then goes through a fermentation process which creates alcohol and carbon dioxide. This is the time when it gets bottled if it is being sold as alcoholic beer. But if that is not the case, the 'beer' must undergo another step."

This added step decants the alcohol content from the concoction. "The most usual and simple method to remove alcohol from beer is to heat the brew. Since alcohol has a lower boiling point than water, it gets evaporated. However, this process can sometimes alter the taste. Another alcohol removal process is similar to reverse osmosis. This method is less destructive for the flavour, though much more laborious and time consuming. After this process, the beverage must be re-carbonated which is done by injecting carbon dioxide into the drink. This is the reason why it is called beer though there is no alcohol content in your fruit beer."

Drinking fruit beer doesn't intoxicate you and the most common one you'll find is the cherry fruit beer. Delhi is abuzz with places that offer fruit beers. You can find them at the food stalls of Dilli Haat. Some cafes like QD's, Sakley's -the mountain cafe and Rigo's restaurant at Majnu Ka Tila also serve different varieties of fruit beers.