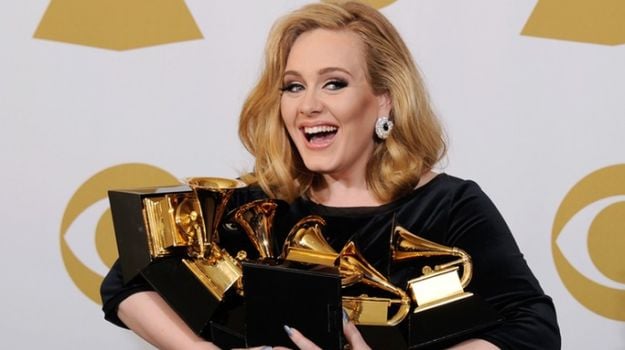 Pop superstar Adele said Monday she was treating herself to fast food after a snafu at the Grammys caused her to go out of tune. Adele, who has shattered sales records with her latest album "25," sang her heartache ballad "All I Ask" at the music industry's big annual gala in Los Angeles.

But a microphone fell on the strings of the piano, triggering a glitch in which the sound briefly went out and her voice later drifted out of tune.

"The piano mics fell on to the piano strings, that's what the guitar sound was. It made it sound out of tune. Shit happens," she tweeted.

"Because of it though... I'm treating myself to an in n out. So maybe it was worth it," the English singer said, referring to the In-N-Out Burger chain popular in California.

Recording Academy president Neil Portnow took responsibility for the glitch and praised Adele. Technicians tried quickly to move away the microphone but the damage had been done and sound in the Staples Center briefly went out, he said.

"It was fixed in a matter of seconds, but we're never happy when something like that happens," he told reporters.

He acknowledged that Adele was "very exposed" as she was singing an intimate song simply with piano.

"Something like that can easily be distracting or offputting, or certainly unexpected. To Adele's credit, she killed it, she did a fantastic job, the pro that she is," he said.

"25," Adele's third album, came out too late for contention in the latest Grammys.

She has previously won 10 Grammys.