After Mangoes, EU Might Now Ban 'Paan' From India 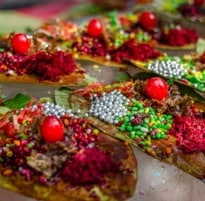 After the recent ban on the import of Alphonso mangoes over claims of a fruit fly infestation, the European union (EU) is now looking to ban Indian betel or 'paan leaves'.

Earlier this week the EU's Rapid Alert System for Food and Feed (RASFF) issued a warning in its annual report that there have been consistent reports of Salmonella contamination of betel leaves from India.

The issue of infected paan leaves  in the EU is a long standing one and it was first brought to notice in 2011 when RASFF signaled that the imports might have traces of Salmonella and E.Coli.

The RASFF annual report stated that, "The continuing reason since 2011 for the high number of reports on Salmonella is paan leaves. The continuous reports notified by the UK prompted the adoption of a safeguard measure suspending temporarily imports of paan leaves from Bangladesh and setting up reinforced checks for paan leaves from India and Thailand."

Salmonella poisoning causes severe diarrhea and vomiting in humans. The RASFF has issued 111 notifications or warnings to India on food contamination last year, of which 12 concern curry leaves and 84 'okra' or ladyfinger.

"Apart from these findings, also five notifications on chilli peppers are noteworthy with sometimes high levels reported," the report concluded.

India ranked the second highest in terms of overall notifications with 257 in total after China's total of 433. The EU ban on Alphonso mangoes effective from May 1 had triggered widespread protests, including a petition to the British government to overturn the ban.
Listen to the latest songs, only on JioSaavn.com
EU inspectors are now expected in India for an early inspection of the crop in September.
Other fruits and vegetables banned included Colocasia (taro, eddo) Momordica sp (bitter gourd), Solanum melongena (eggplant) and Trichosanthes sp (snake gourd).

The EU says that the decision was taken due to a high number of intercepted consignments containing quarantine pests which could harm European crops.