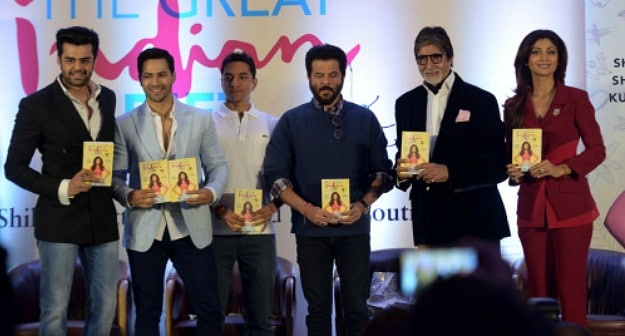 Megastar Amitabh Bachchan says he does not follow any particular diet to stay fit but started hitting the gym after watching some of his own films. The 73-year-old "Piku" star, who famously played a chef in "Cheeni Kum", said he is a "bad eater" whose eating habits are very dissimilar to people who follow a diet.

"I am a bad eater. I don't follow any routine... I started going to the gym about five-six years back. I never used to do any kind of exercise. Most of the times when I was working on my earlier films, I never thought about it, or I wasn't advised about it, or perhaps I didn't have the time at all. "But having seen some of my visuals on some of my films, I realised I needed to be in shape and started going to the gym on some kind of regular basis. But I've not followed any food routine," Bachchan said.

He was speaking at the launch of actress Shilpa Shetty Kundra's book "The Great Indian Diet". Shilpa, who has co-authored the book along with nutritionist Luke Coutinho, said the duo took nearly three years to pen the book. "This has been a dream... Happy that it has seen the light of the day. The aim of the book is to shift focus from weight loss and focus on gaining health. To stop being weight obsessed and start being health obsessed," she said.

Actor Anil Kapoor, 58, who has penned the foreword of the book, said his mantra of staying fit is a healthy lifestyle despite the fact that many people say he is not aging. "Of course I am ageing, everybody knows it, I know it. I am not delusional about it. You get emotional, and it's the first sign of old-age, you get sentimental. I am very emotional... But for me, it's very simple, it's the mind and the lifestyle."

"Dilwale" actor Varun Dhawan said he wants his father, filmmaker David Dhawan to shed some weight. "It's a popular knowledge that my father is not the healthiest person, he has diabetes... I want my father to lose weight. At least for a child it's an emotional thing when your parents grow old, you want them to stay longer with you and healthier," he said