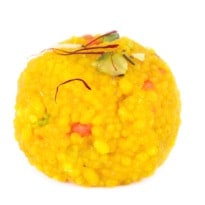 A shop owner from Tapeswaram in Andhra Pradesh prepared a gigantic laddu weighing a whopping 7,858 kilogram which was offered to Lord Ganesh during Ganesh Chaturthi. The giant laddu has now found a place in the Guinness World Records.

Sri Bhaktanjaneya Sweets bagged a place in the Guinness World Records for the fourth consecutive time. Shop owner S Venkateswara Rao said that he could achieve this feat only with the blessings of his family and the cooperation of his 25 staff members at Bhaktanjaneya. Rao, who is a school drop out joined his father S Satyanaraya Murthy in running the then small hotel. He said that his aim is to outdo his own record every year.

Gradually, the shop in Tapeswaram began catering to travellers en-route, after buses and other vehicles began halting there for a small snack," Rao said. Subsequently in 1972, they expanded the hotel into a full-fledged sweet mart and have been famous for serving their patent Kaza sweet.

Rao now intends to open outlets of his shop in Vijayawada and Visakhapatnam with the help of his children who are now pursuing higher studies. The sweet mart has earlier received State-level awards for its Kaza preparation before entering the Guinness Records. "Our range of products start from laddus of small size to bigger ones as huge as 60-1000 kg," Rao said.