The Burj Al Arab Jumeirah partnered along with Amstur Caviar to unveil a 37pound tin of caviar, the largest in the world yet. It has carved a niche for itself in the Guinness Book of World Records. 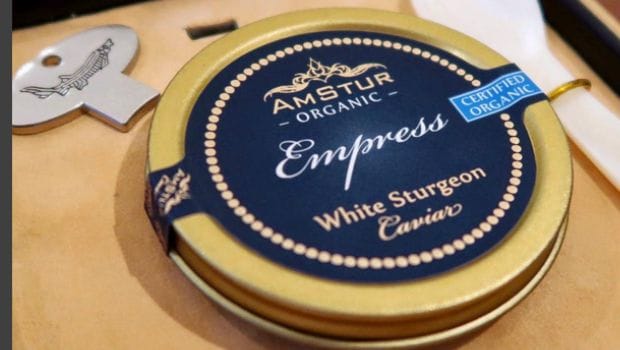 Highlights
Dubai is synonymous with luxury when it comes to the tallest, biggest and fastest things.  And it seems to have broken yet another record by showcasing the largest tin of caviar in the world.

The Burj Al Arab Jumeirah partnered along with Amstur Caviar to unveil a 37pound tin of caviar, the largest in the world yet. It has carved a niche for itself in the Guinness Book of World Records. The occasion was a reception party hosted at the hotel. The tin was named “ The Mashenomak”. Interestingly, it was custom designed by Amstur. The caviar inside the tin was 37 pounds of organic caviar. What’s more fascinating is the fact that the caviar had to be consumed completely, in order to label the city as the winner and to achieve a place in the Guinness Book. This compelled the guests and motivated them to take large servings in order to achieve the goal. Arrangements were made accordingly. The spoons used were “custom-engraved mother of pearl-spoons” customized and created specifically for the event.

Promoted
Listen to the latest songs, only on JioSaavn.com
The Burj Al Arab Jumeirah, has often found itself in the middle of controversy about being a 7 star hotel. There are conflicting opinions regarding the same and the owner has recently confirmed that it’s a 5 star hotel.

When it comes to food, Dubai has always been at the forefront because of its high standards.

An organic culinary masterpiece, a title exactly describing the beauty of the tin, it was not only appealing to look at but reportedly also was delicious. The tin was able to meet the criteria and thus successfully managed to win the exclusive competition.

CommentsAmStur was overjoyed at the success of the event and was extremely grateful to have partnered with the most luxurious hotel in the world, Burj Al Arab Jumeirah. This made the starting of 2017 much more special and memorable.