It's actually a variation of a Burmese salad - Khauk swe thoke. 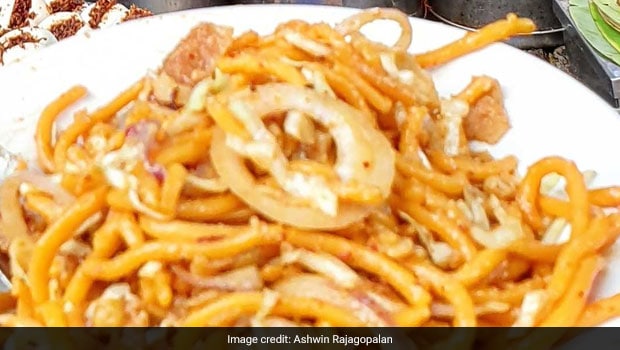 The Atho makes for a perfect any-time snack; it's flavourful and yet not too spicy.

Sometimes the longest journeys can be in your own city. There are times when you can feel at home half way around the world and yet feel like a tourist 45 minutes from home. I'd been putting off a visit to Second Line beach near one of Chennai's famous markets - Burma Bazaar, for almost four years. During this time my Asian food trails took me as far as Luang Prabang in Laos and some of Hanoi's busiest streets. It was a Burmese food promotion at Soy Soi, one of Chennai's premier Pan Asian restaurants that was the knock on the head I needed to roll up my sleeves and head straight to the city's Burmese food stalls.

For years Burma Bazaar was Chennai's hub for imported goods. The market is synonymous with a wave of Tamil migrants who left Burma in the 1960s. Many of these migrants set up tiny stalls that primarily catered to their own community. Ibrahim and his older brother were among those people who set up a street stall in the 1980s. There's no signboard and the menu is a black and white printout that you can barely spot.

It is probably the dish that defines Chennai's version of Burmese food.

Nanda, one of Ibrahim's staff members, was quick to spot my Instagram eye and keen to know if I found out about their stall on the Internet or thanks to a story on a Tamil TV channel. He tells me that there are at least seven such stalls around the area that all open between 3 and 5 pm and operate till midnight. This is not a zone for fancy dining, I see Ibrahim scoop out noodles with his hand but that's the thing with street food, you need to take it as it comes or don't take the plunge at all. Google Atho or Burmese food in Chennai and you will be overwhelmed with the search results. Blame it on hashtags like 'foodporn' but what started as an affordable street food option in this quarter of North Chennai has become a city-wide phenomenon. There are Burmese stalls across the city but I have to agree with Nanda when he says Second Line Beach is the real thing.

It is probably the dish that defines Chennai's version of Burmese food. It's actually a variation of a Burmese salad - Khauk swe thoke. This wheat noodle salad is made with dried shrimp, cabbage, carrots, fish sauce and finished with lime and fried peanut oil. These salads are referred to as athok or thouk in Burma, which became Atho in Chennai. The version here doesn't feature the fish oil, and is made with grated carrots, cabbage, fried onions combined with garlic oil, chilli powder and lime juice. The orange noodles are mixed with these vegetables (almost always by hand) and the Atho gets its crunch from the addition of bejo, a crispy deep-fried snack crafted with rice flour and a sprinkling of peanuts. The Atho makes for a perfect any-time snack; it's flavourful and yet not too spicy.

Other Stuff To Try

Masala eggs are one of the popular accompaniments. Boiled eggs stripped of their yolk and filled with masala fried onions. There's also Atho fry where the vegetables are flash-fried and then combined with the noodles and eggs. One of my favourite dishes here is a soup made with banana stem. You can also add a couple of spoons to the Atho to make it a soupy noodle salad or sample the Chennai version of Mohinga - maida noodles in a soupy bowl. The Mohinga is one of Burma's emblematic dishes and was traditionally a breakfast staple that has now become an all-day dish that is popular with street vendors.

(Also Read: 5 Places In Chennai To Find The Perfect Plate Of Idli Sambar)

You don't have to make the trek to Second Line beach's popular street stalls like Ibrahim or Gajendran, to try Chennai's spin on Burmese cuisine and the omnipresent Atho. There are other popular eateries like Rangoon Atho Shop (in T Nagar) and Burma Atho Kadai (Shop) in Ashok Nagar that offer similar flavours. But if you want to try Atho where it all began then get ready to stand in line along the street stalls near Burma Bazaar.