Bad breakfast habits in youth up risk of metabolic syndrome 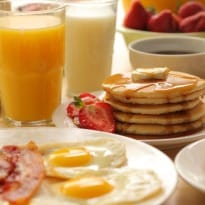 Teens who eat poor breakfasts are more likely to develop metabolic syndrome - a group of health problems that can increase the risk of heart attack, stroke, and diabetes - in adulthood, a new study has warned.

Researchers from Umea University in Sweden found that adolescents who ate poor breakfasts displayed a higher incidence of metabolic syndrome 27 years later, compared with those who ate more substantial breakfasts. Metabolic syndrome is a collective term for factors that are linked to an increased risk of suffering from cardiovascular disorders, researchers said.

After 27 years, the respondents underwent a health check where the presence of metabolic syndrome and its various subcomponents was investigated, researchers said. The study showed that the young people who neglected to eat breakfast or ate a poor breakfast had a 68 per cent higher incidence of metabolic syndrome as adults, compared with those who had eaten more substantial breakfasts in their youth.

Promoted
Listen to the latest songs, only on JioSaavn.com
This conclusion was drawn after taking into account socioeconomic factors and other lifestyle habits of the adolescents in question, researchers said. Abdominal obesity and high levels of fasting blood glucose levels were the subcomponents which, at adult age, could be most clearly linked with poor breakfast in youth, they added."Further studies are required for us to be able to understand the mechanisms involved in the connection between poor breakfast and metabolic syndrome, but our results and those of several previous studies suggest that a poor breakfast can have a negative effect on blood sugar regulation," said Maria Wennberg, the study's lead author. The study was published in journal Public Health Nutrition.