Bhumi Pednekar Is Indulging In Loads Of Chocolate At Winter Wonderland In London! (See Pics) 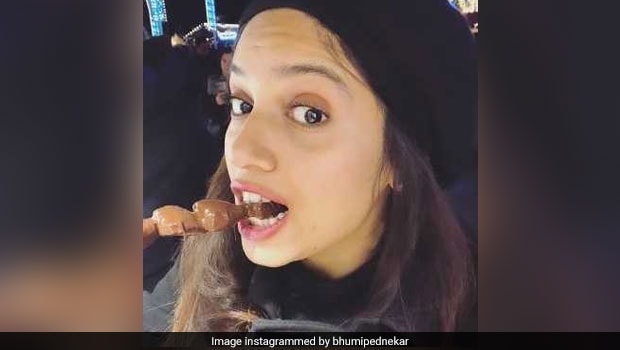 Bhumi Pednekar is having foodie fun at Winter Wonderland in London

London is a popular haunt of Bollywood celebrities during winters. Around Christmas and New Year's, a number of top film actors can be spotted holidaying in the chilly city that offers a lot of shopping and eating opportunities. Currently, some of the Bollywood celebrities giving us major winter feels through their London holiday posts, including Shilpa Shetty Kundra, Parineeti Chopra and Bhumi Pednekar. While Shetty is having a blast eating her way through London with her family, Pednekar is also marking the start of the year by indulging in fun and delicious food. The 'Dum Laga Ke Haisha' actor is enjoying holidays with her sister Samiksha Pednekar and the two seem to be having a gala time.

Bhumi Pednekar posted a picture of her chocolate indulgences at Winter Wonderland that is going on in London's Hype Park right now. The annual Christmas carnival is a huge hit with tourists who flock to the city, just to witness the festivities that begin in mid-November and go on till early January. Bhumi's choice of desserts included strawberries covered in molten chocolate. Earlier, Ananya Panday had also posted pictures from her visit to the Winter Wonderland in 2018.

Also Read: How To Temper Chocolate: Everything You Need To Know

Take a look at snapshots from Bhumi Pednekar's chocolate indulgence in London:

That looks so decadent! Other than her amazing acting chops that Bhumi has proven in her films time and again, she is also known for her dramatic weight loss, which left everybody amazed. Bhumi Pednekar had detailed how she lost 25 kgs in four months, through a healthy diet and regular and rigorous exercise regime. She is known to post inspiring gym photos on her Instagram to motivate us to be healthy as well. Well, we guess you've earned all those calories Bhumi!