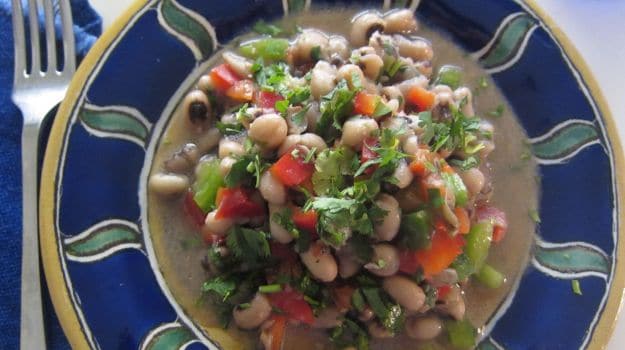 I used to think of black-eyed peas as a purely American food, much loved in the South. Despite the time I spent living in Austin, I've never made them the way Texans do, using ham hocks or salt pork for flavoring, and I've had more than one run-in with staunch traditionalists who have challenged -- even berated -- my vegetarian approach.

Even now that I'm not a strict vegetarian (albeit it's the way I eat most of the time) I prefer black-eyed peas that have not been simmered with pork products. I love their earthy depth of flavor and I have never thought, "Gee, these would be really great if they just had some pork to flavor them." They have plenty going for them on their own.

As I've researched the cuisines of the Mediterranean over the years, I have learned that these beans are an important staple in that part of the world, especially in Greece and North Africa. They are the backbone of some of my favorite Mediterranean dishes.

Black-eyed peas are native to Africa. According to cookbook author and Zester contributor Clifford A. Wright, they had arrived in the northern Mediterranean by about 300 B.C. and were cultivated by the Romans. The beans traveled to South America with the slave trade, but they came to North America via the Mediterranean. They are much loved in Greece, where they are stewed in abundant olive oil, often with greens, or used in lighter salads or bean dishes and seasoned with wild fennel, mint, dill and parsley.

In Tunisia, a country with a rich repertoire of vegetable stews or tagines where you are not likely to see pork with beans (because of Muslim dietary rules), black-eyed peas are simmered with abundant spices, vegetables like greens and fennel, and lots of fresh herbs -- cilantro, parsley, mint. The spicy bean tagines are ladled over couscous. These dishes are complex, with an array of seasonings -- harissa, caraway and coriander seeds, cumin and garlic.

But my favorite black-eyed peas are the ones that I make year after year. I cook the beans with onion, garlic and bay leaf, then toss them while warm with a cumin-infused vinaigrette, chopped bell peppers, and lots of cilantro. The balance of flavors is perfect. It's a traditional good-luck dish on New Year's Day, but it never fails to leave me feeling optimistic about the future -- no matter the time of year.

For the beans:
1 medium onion, cut in half
1 pound black-eyed peas, washed and picked over
2 quarts water
2 or 3 garlic cloves, minced
1 bay leaf
Salt to taste

1. Combine the onion, black-eyed peas and the water in a soup pot or Dutch oven and bring to a gentle boil. Skim off any foam from the surface of the water. Add the garlic, bay leaf and salt to taste (about 2 teaspoons). Reduce the heat, cover and simmer 30 minutes. Taste and add more salt if desired. Cover and simmer 10 to 15 minutes, until the beans are tender but not falling apart. Remove from the heat. Remove onion halves and bay leaf. Carefully drain the beans through a colander or strainer set over a bowl and transfer to a large salad bowl. Measure out 1/2 cup of the bean broth.

2. In a pyrex measuring cup or small bowl, whisk together the vinegar, garlic, salt, pepper, cumin, and mustard. Whisk in the bean broth, then the olive oil. Taste and adjust seasonings. Stir the dressing into the warm beans. Stir in the red pepper and cilantro, and serve, or allow to cool and serve at room temperature.

1. Wash and pick over the beans. Heat 2 tablespoons of the olive oil in a large, heavy soup pot or Dutch oven and add the onion. Cook, stirring, until tender, about 5 minutes. Add the garlic and fennel leaves and cook, stirring, for a minute, until the garlic is fragrant and the fennel beginning to wilt. Stir in the tomatoes and bring to a simmer. Add the black-eyed peas and enough water to cover by an inch, and stir together. Bring to a boil, reduce the heat, and simmer 30 minutes.

2. Add salt to taste (about 2 teaspoons) and freshly ground pepper, and continue to simmer until the beans are tender, another 15 minutes. Stir in the remaining olive oil. Taste and adjust seasonings. Serve warm or hot, garnished with additional chopped wild fennel if desired.

Couscous With Black-Eyed Peas and Chard

1. Heat the oil over medium heat in a heavy casserole or Dutch oven and add the onion. Cook, stirring, until tender, about 5 minutes. Add a generous pinch of salt, the chard stalks, garlic and ground spices, and stir together for about a minute, until the garlic is fragrant. Add the black-eyed peas and 3 quarts water, and bring to a gentle boil. Reduce the heat, cover and simmer 30 minutes. Add the harissa or cayenne, the tomato paste and salt to taste, cover and simmer another 15 to 30 minutes, until the beans are tender and fragrant. Strain off 1/2 cup of the liquid and set aside to add to the couscous when you reconstitute it.

Promoted
Listen to the latest songs, only on JioSaavn.com
2. Stir in the chard a handful at a time, allowing each handful to cook down a bit before adding the next. Simmer 5 to 10 minutes, until the chard is tender and fragrant. Stir in the parsley and/or cilantro and simmer another few minutes. Remove from the heat. Taste and adjust seasonings, adding salt, garlic or harissa as desired.

3. Reconstitute and warm the couscous while the black-eyed peas are cooking. Shortly before serving, transfer to a wide serving bowl, such as a pasta bowl, or directly to wide soup plates. Spoon on the black-eyed peas and greens with plenty of broth, and serve, passing additional harissa at the table.