Bring On The Funk: Nothing Spoils A Fermented Life 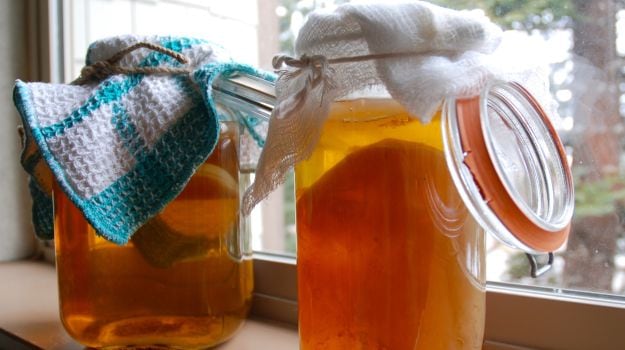 Among the many stinky, potentially explosive things in the world I leave to the professionals, fermentation ranks high on my list. An afternoon with my daughter Hayley, however, opened my eyes to what I have been missing. "It's a cheap way to feel good," says my recent college grad surviving on minimum wage. "And kind of critical, considering all of the bubble gum-flavored antibiotics you dosed me with as a child."

Fermented foods are part of Hayley's daily routine. She drinks a couple of glasses of homemade kombucha - a bacteria-laced apple cider vinegar - as a snack. Her countertop is cluttered with kimchis and sauerkrauts brewing with all manner of vegetables. "When a vegetable in the fridge is about to go bad, we just cut it up and throw it in a jar with salt and whatever spices and herbs are lying around," she explains.

When she shows me her SCOBY -- symbiotic communities of bacteria and yeast -- a white floating island growing on top of a current batch of kombucha, I call a timeout. Really proud of the frugality, my dear, but how does something so gross make you feel good?

"My body now is a well-oiled machine," Hayley laughs and rests her case.

Her confidence comes from studying books by Sandor Ellix Katz, a fermentation evangelist she discovered while working as an intern with Chefs Collaborative, a national organization of chefs devoted to sustainable practices. "He's given me a healthy respect for gut bacteria," Hayley notes.

Before Katz became its champion, fermentation was more ignored than dismissed among food professionals. It never went out of style, he told a Chefs Collaborative gathering of environmentally conscious chefs. It was living, neutered, behind the wall of industrial food processing.

We crave fermented foods; think chocolate, cured meats, beer, wine and cheese, he said. "Fermentation creates the strongest flavors," Katz asserted. "People who have grown up not accustomed to them find them scary... and inaccessible."

When modern America declared war on bacteria, pasteurizing and sterilizing processed food, Katz believes we robbed food of much of its nutritive value. Worse, we lost our healthy gut bugs in the process, fracturing an elegant symbiotic relationship with the microbial world. With the release of his 2003 book "Wild Fermentation," Katz began barnstorming the country in the equivalent of a "bring back bacteria" tour.

Katz grew up on sour pickles in New York City, but he didn't think to ferment on his own until he was diagnosed with HIV and moved to rural Tennessee in search of a way to manage his health through diet. Experiments with making sauerkrauts from old garden cabbages, he says, changed his life. His enthusiasm for fermenting became contagious. Both "Wild Fermentation" and his next book, "The Revolution Will Not Be Microwaved," became manifestos for food activists.

His third book, "The Art of Fermentation," cemented his reputation as an authority on the topic. In the foreword to this dense tome, Michael Pollan calls the book an inspiration. "I mean that literally. The book has inspired me to do things I've never done before, and probably never would have if I hadn't read it.

"Sandor Katz writes about the transformative power of fermentation with such infectious enthusiasm that he makes you want to try things just to see what happens," Pollan writes. But the book is more than a "how-to" guide. "It tells you why an act as quotidian and practical as making your own sauerkraut represents nothing less than a way to engage with the world."

Add sugar (about ¼ cup to every liter, more or less to personal taste).

Add a SCOBY mother (obtainable from a fellow brewer or a health food store).

Let it sit for 10 days and watch the new SCOBY grow on the surface of the liquid.

Flavor the final product with whatever you like. Fruit or vegetable juice, herbal infusions and mint are a few of his suggestions.

Hayley likes the experimentation. "Katz embraces the uncertainties of dealing with something that is alive, and invites you to explore the world of fermentation for yourself," she says. He gently guides folks toward ever more daring adventures in fermentation.

Promoted
Listen to the latest songs, only on JioSaavn.com
Her most recent experiment was cutting up a discarded SCOBY and turning it into gummy candies. Not bad tasting, but well beyond her mother's comfort zone.