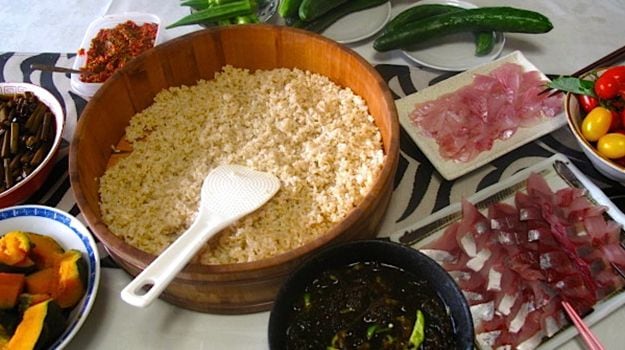 Hideo Ono, a lean 65-year-old with deep crow's feet around his eyes and a farmer's tan, has been growing rice in the village of Tajima, Niigata, in the northwestern part of Japan for 20 years. The region is known for growing the best rice because of its distinct four seasons and good water that filters down from the surrounding snow-capped mountains.

Despite being a late comer to his career as a farmer, Ono is the founder of Joint Farm, a co-op that grows one of the most sought-after premium-grade heirloom short-grain rice varieties, known as Koshihikari rice. The varietal is sold under several labels, including Gensenmai and Mugenmai. Compared to the insect-resistant, higher-yielding, modern strain of the Koshihikari BL varietal most Niigata farmers are cultivating these days, Ono prefers the heirloom Koshihikari because of its distinct flavor and fragrance.

Koshihikari rice is sold in milled and unmilled styles, but if Ono had his way, everyone would eat brown rice, the unmilled variety. In fact, when Ono is not in the fields working, you will find him on the road, doing brown rice cooking demonstrations and tasting events all over the country and overseas.

Why is he so passionate about spreading the gospel of brown rice? Ono advocates brown rice instead of white rice because of its many health benefits. Brown rice is known to lower the risk of developing diabetes, and it's high in fiber, which promotes cardiovascular health. It is also a good source of minerals that support bone health, and its oil has been known to lower cholesterol. Finally, it can also help prevent weight gain.

Ono attributes his well-being to eating a diet full of brown rice, but he said he was not always so healthy.

On a recent visit to Ono's rice farm, he pulled his wallet out of his pocket and showed me a faded photo of him taken with a sumo wrestler nearly 20 years ago. "Can you guess which one is me?" Ono asked. At first glance, I could not tell because both men were heavy. Ono pointed to the man on the right and said, laughing, "That's me. I am fatter than the sumo wrestler."

In a flashback to his days as a furniture salesman in the 1980s, Ono said that in his 40s he suffered from obesity and high blood pressure. Warned by his doctor that he was a walking time bomb, he knew he would die early if he kept up his excessive drinking and poor eating habits. That's when Ono decided to restore his health through a diet centered on vegetables and brown rice. At the same time he took up farming, a much more physical job. He went to apprentice with a local farmer and never looked back.

While pursuing his new lifestyle, Ono met Atsuko. They got married and moved to Tagami, where they started their rice farm.

Ono and the farmers in the Joint Farm co-op grow rice sustainably and organically; they make fertilizer pellets from naturally recycled rice bran; coffee grinds; tea leaves; minerals; and okara, which are soybean curds that occur as a byproduct of tofu. He is against using animal manure in farming because the feed given to fertilizer-producing animals can contain a number of chemicals which, if used, would inevitably pass through to the rice.

"The fertility of soil and quality of fertilizer together play important roles with regards to the quality of the rice,'' Ono said.

One of the highlights of the visit was the farm-to-table suppers at Ono's farmhouse. His friend, chef Fumihiko Ono (no relation) from the Yagi Culinary Institute, joined us from Tokyo for what turned into a two-day feast. It began with a trip to the market to buy local fish to make sushi.

Tagami is about 45 minutes inland from the Sea of Japan, which is known for its abundance of seafood. We bought a whole young Isaki (baby yellowtail), Hachime (a local fish that looks like a small snapper) and a wiggly leg of an octopus with the biggest suction cups I have ever seen.

Back at Ono's farm, Chef Ono cleaned the fish and prepared sashimi while the rest of us harvested tomatoes, eggplant, okra and cucumbers from the farm. We also enjoyed regional delicacies the Onos had prepared in advance, but the unique part of the sushi supper was the rice.

We made it using short-grain brown rice, which would be considered heresy to most Japanese people, who are accustomed to eating short-grain white rice with sushi.

To make the sushi rice, the brown rice was seasoned with vinegar and salt, but no sugar. Chef Ono arranged the sashimi for the temaki-zushi (sushi hand rolls). The vegetables were washed in cool well water and left whole for us to bite into.

The diners all made their own hand rolls, starting with a stack of nori seaweed. The fillings along with soy sauce, wasabi paste and pickled ginger were passed around so everyone could create their own sushi rolls.

When it was time to leave, Ono said, "Come back to Tajima during harvest time,'' filling his face with a wrinkly smile. The distinct flavor and texture of the brown rice lingers. I appreciate what it takes to make such exquisiteness.

For the best results, follow the rice-to-water ratio recommended by the rice manufacturer. Pickled ginger and plum vinegar are sold at Asian grocery stores. Plum vinegar is a byproduct of making pickled plums. The vinegar is salty, so no salt is needed to season the sushi rice.

To make the brown rice and sushi fillings:

2. Bring rice to a boil over medium-high heat. Cover with a tight-fitting lid, reduce heat to a low simmer and cook 45 minutes. (No peeking.) Remove from heat, without peeking, and let it continue to steam for 10 minutes.

3. Season the cooked brown rice with plum vinegar, then transfer it to a large bowl. Prepare the rice as close to serving time as possible.

4. To arrange the sushi platter, slice up as many fillings as you like to make a colorful presentation. Store in the refrigerator until just before serving, and then prepare the sushi rolls as close to serving time as possible.

1. Each roll is made of half a toasted nori seaweed sheet. If smaller rolls are preferred, cut the seaweed sheets in quarters. The roll should contain about 2 tablespoons of sushi brown rice, or enough to grasp with one hand.

2. With a spoon or chopsticks, scoop up the rice and lay it onto the sheet of nori. Spread with hands chopsticks or a spoon.

3. Dab the nori with a little wasabi paste, then lay 2 to 3 fillings on top of the bed of rice.

4. Wrap the seaweed sheet and its contents into a roll.

5. Dip it in soy sauce and eat. Freshen your palate with a few bites of pickled ginger.