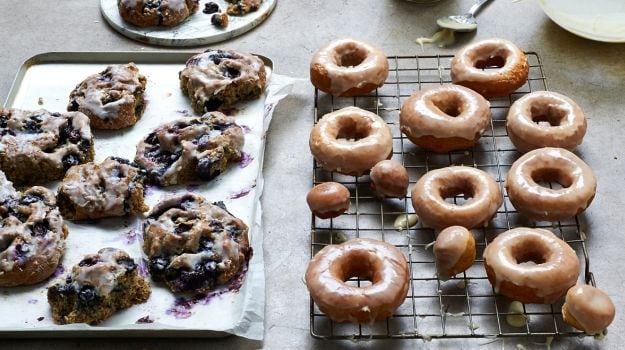 Put on your lab coats – there’s mad science at work in this week’s bakes. Acidic buttermilk reacts with bicarbonate of soda to form a quick, sweet-and-sour dough perfect for honey‑glazed doughnuts and blueberry soda bread buns.

Apart from in the occasional American-style pancake or spruced up scone, buttermilk rarely gets a chance to shine in our cooking. It’s a shame, because its bright tang is the ideal foil to the kind of sickly sweetness and heaviness that baking’s so prone to. It’s also good at keeping cakes perfectly tender, while its acidity – when set off with a pinch of bicarbonate of soda – gives a good rise and light, open crumb. Put it to good use in a glazed cake doughnut or a sweet, blueberry-studded morning roll.

Buttermilk doughnuts with a honey glaze

Because they are made with baking powder, these doughnuts are far easier and less temperamental than their yeasted cousins. These are closer to the kind of doughnuts you find heaped into grease-stained bags at the funfair and on the seafront than the round sort, plump with custard, chocolate or jam. They’re light and spongy when freshly cooked – far softer than bread doughnuts, and richer too.

Deep-frying is scary the first time you try it – particularly if you don’t have the luxury of a deep-fat fryer – but give it a go and you’ll find it surprisingly quick and straightforward, if you work carefully. Just make sure you have a sugar thermometer to monitor the temperature of the oil, and keep small hands far away from the action during the frying (there’s plenty for kids to help with during the rolling, stamping and, later, the dunking stages).

1 First, prepare the glaze. Melt the butter over a low heat. Stir the icing sugar and water together until a thick paste forms, then add the honey, vanilla extract and salt. Whisk in the melted butter until smooth. Set aside in a large bowl (one wide enough to dunk the doughnuts in later).

2 Pour the cooking oil into a large pan (not nonstick) to a depth of at least 9cm. Do not to overfill the pan. Heat the oil until it’s 180C/350F; use a sugar thermometer to monitor the temperature. Don’t leave the oil unattended while it’s heating. Once it’s up to temperature, turn the heat right down, or even off, to prevent it from smoking.

3 While the oil heats, prepare the dough. Combine the flour, sugar, baking powder, bicarbonate of soda, salt and nutmeg in a large mixing bowl. Whisk the egg, buttermilk and vanilla together in a separate bowl before adding this mixture to the dry ingredients. Stir together to get a sticky, malleable dough.

4 Dust a work surface with plenty of flour, then empty the dough on to it. Pat the dough out to a thickness of roughly 1cm (you can use a rolling pin if you want, but I find it easier just to use my hands here), flouring it as you go to minimise sticking. Cut out 8cm circles using a pastry cutter, then use a smaller 3-4cm cutter or appropriately sized lid to stamp out the small holes in the middle of each doughnut. It’s up to you whether you gather up these doughnut holes to make more doughnuts or just fry them as they are.

5 Fry the doughnuts in batches of 3 or 4, cooking them for 1 ½ minutes on each side. Once cooked, pat dry on a piece of kitchen towel to soak up any excess oil, then, while they’re still warm, dip them in the glaze, coating one or both sides. Leave to cool and set on a wire rack, then repeat the frying and glazing with the remaining doughnuts. These are at their best when they’re freshly cooked, but you can revive them the next day (if they last that long) by warming them in the microwave or a low oven.

Chelsea buns, sticky cinnamon swirls, dough wrapped in toasted pecans and chocolate chips … sweet buns are as good as baking gets, but they’re not ideal if you’ve got an impatient sweet tooth. Too often the thought of a lengthy knead and slow prove sends me careering towards the biscuit tin instead in my laziness. This is a recipe that sidesteps all that hassle, using a quick buttermilk dough instead of the usual bread sort, so you can have these ready, from storecupboard to table, in under an hour. They’re great for breakfasts because they’re not too sweet, but just as good as an afternoon snack.

2 Stir the flours, 100g of the caster sugar, baking powder, bicarbonate of soda, cinnamon and salt together in a large bowl. Mix in the poppy seeds and lemon zest. Pour in the buttermilk and work the ingredients together using a wooden spoon until a rough, slightly sticky dough forms. If the mixture feels very floury or crumbly, add a drop of milk.

3 Dust the work surface with flour and roll the dough out to a rectangle roughly 50x30cm, flouring the rolling pin as you go. Scatter the blueberries all over the surface of the rectangle and pat them gently into the soft dough. Dust over the remaining 25g of caster sugar.

4 Roll the rectangle up from long edge to long edge to give a roll roughly 50cm long, pinching the dough a little as you reach the end to help it stay securely rolled. Trim off the ends, then cut into 12 equal slices. Arrange these rolls in the prepared dish, spacing them equally and leaving a couple of centimetres between each to allow them room to rise.

5 Bake for 25-30 minutes, until they’re fat, firm to the touch and mottled with juice from the blueberries. Meanwhile, prepare the glaze: stir the icing sugar together with enough lemon juice to give a thick, but pourable icing.

6 Once the buns are cooked and still hot from the oven, brush them liberally with the lemon glaze and leave to cool a while in their tin. These are at their best when still slightly warm.