Caffeine compared: from coke and coffee to aspirin and chocolate 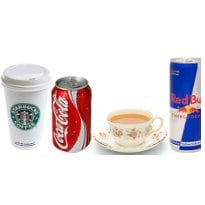 People are increasingly aware of the side-effects of caffeine - but do they know the volume of the drug they're drinking in their favourite beverages? Get the data here

There's a drug whose appeal shows no sign of slowing. It's a stimulant for the central nervous system and it was an ingredient in 136 million bags exported around the world in 2012.

Those bags were coffee and the drug was caffeine - but there's a lot more to it than just the one beverage. Tea, energy drinks, chocolates, chewing gum, sweets and even weight-loss tablets have all got a caffeine content. We compare them here.

There are 20mg of caffeine in your average 100g of brewed tea compared to 40mg in the same amount of black filter coffee. But the type of tea, as well as the brewing time makes a difference.

We were surprised too. 100g of your average cola contains just 8mg of caffeine - although for reduced sugar varieties that number goes up to 15mg.

One of the biggest brands in high-sugar energy drinks, Red Bull, has just 30mg of caffeine per 100g which still leaves the traditional americano in first place in the caffeine contest.

But a look at other energy drinks shows that Red Bull is a relative light-weight in the alkaloid department. New energy shots like Ammo (whose site claims "was developed for the U.S. Military Special Forces like Navy Seals, Green Berets, and Delta Force) are supposed to be drunk in low volumes but 100g of the stuff would contain a dizzying 570mg of caffeine - that's 14 cups of coffee.

Here are the ten most caffeinated energy drinks - along with brand names that are as neon as the liquids within.

There's also a growing trend for mixing drugs - in this case alcohol and caffeine. The US Food and Drug Administration lists (not without a note of caution) 70 of these products.

It's not just drinks

From jelly beans to energy infused potato chips, caffeine is increasingly coming in a chewable form. Foosh energy mints have 5,555 mg of caffeine per 100g - that's 139 cups of coffee (and, we assume, without the halitosis). Buzz Bites Chocolate Chews were the second highest on the adult sweeties list with 1,639mg of caffeine per 100g.

It's not all plain (highly alert?) sailing though - when gum giant Wrigley attempted to launch a caffeinated chewing gum earlier this year they ended up having to halt production after officials raised concerns about children and adolescents consuming the stuff.

From Aspirin to Triaminicin (used to reduce fever and relieve pain) several doses of drugs will also contain a hit of caffeine. There are 65mg of caffeine in Aspirin Bayer Select Maximum Strength and 40mg in Repan (used to treat headaches).

Many of the weight-loss supplement pills listed by the US authorities also include high dosages of caffeine - presumably in the belief that it may act as an appetite suppressant. For those who are seeking a direct fix, a range of caffeine tablets are also widely availble that have dosages between 175mg and 200mg.

You can compare the main caffeine products from cola to dark chocolate coated coffee beans in the chart below.

You can get all the data, published by the US Food and Drug Administration here. Do these numbers surprise you? Tell us about your caffeine habits in the comments below.

Update: Several commenters wanted to see caffeine contents per portion as well as per 100g. All those numbers are available in the spreadsheet but we've summarised a few in the table below in case it's helpful.

Photo: How many grams of caffeine are there in a litre of coffee? How do energy drinks compare? Photograph: /Guardian