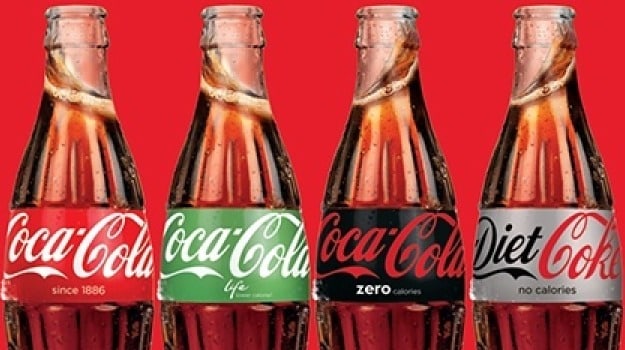 Up until now, the four ranges have had distinct individual design and marketing strategies, aimed at different audiences, but under the new proposition they will be united by an ad campaign featuring all the packs with a linked design. The activity will be introduced across the UK and Europe from next week, with full distribution and marketing launching in May.

Related: Debranding: why Coca-Cola's decision to drop its name worked

This move is intended to reinforce the iconic Coca-Cola brand across the whole portfolio of products, it is a fundamental change in strategic direction intended to position Coca-Cola as a master brand. However, the design proposal that has been revealed will not necessarily deliver the desired master brand effect.

The classical error here is that there is confusion between the communications strategy and packaging. Quite simply, a communication strategy cannot work if it is not in sync with the branding; a master brand cannot be created through communications alone, even if the advertising campaign features all the packs in the portfolio together.

If the sub-brand names are retained, even if they are reduced significantly in size on the cans and bottles, the brand is confusing and difficult to navigate. For Coca-Cola to achieve its aim, it needs a single visual identity along with recognisable descriptive naming: a master brand.

It is clear that Coca-Cola is concerned that fully adopting a master brand strategy on their packaging may lead to a loss of recognition for variant names that the consumer is currently familiar with: Zero, Life, and Diet Coke are all iconic products in their own right. Inevitably, these sub-brands were added to the portfolio over the years to solve targeting problems and competitive product innovation. Separate communications created separate values for each new sub-brand as they were added to the portfolio, enabling consumers to understand intuitively what they were about and who they were for.

This recent activity heralds a major change in direction for Coca-Cola. The announcement follows slump in sales and Coca-Cola may be trying to reverse the trend. Overall, value sales fell £30m in 2014, with only Zero and the newly-introduced Coca-Cola Life showing signs of growth in the same period. Perhaps it is also to bring the packaging in line with the introduction of the government's front of pack labelling scheme, which Coca-Cola announced it would adopt last year.

As far as marketing is concerned, brand must come first, but brand strategy is not the same as communication strategy. The newly-proposed unifying of brand values will enable the Coca-Cola company to make cost savings through the rationalisation of advertising. But for this to work, the branding and packs must be executed with the same strategy in mind.

Whilst Zero and Life could potentially fit as part of the master brand strategy, Diet Coke remains an elephant in the room here. It has been around much longer and has a distinct personality which it stands to lose under the shift to a true master brand strategy, which requires a fundamental break in the current design code. Under this code, Diet Coke should adopt the Coca-Cola brand name and become Coca-Cola Diet. This is neither good nor bad, but a consequence that needs pointing out and should not be ignored as it will lead to conflicts with Zero which will, if articulated in descriptive terms, be too similar.

Related: Coca-Cola Life: can brands ever play a role in tackling obesity?

Coca-Cola's shift to creating a master brand is a great idea; the sub-brands will do well to be embraced under the world-famous original. However, what has been revealed so far is only an executional aesthetic change, rather than a strategic brand redesign. It may well create confusion not enhancement, and eventually converge into flavour variants, not separate propositions. In order to be truly successful, this design change must transition into a bigger vision.

I wonder whether we will see this in the near future.

To get weekly news analysis, job alerts and event notifications direct to your inbox,sign up free for Media Network membership.

Diet Coke has a distinct personality that it stands to lose under the shift to a true master brand strategy. Photograph: Coca-Cola