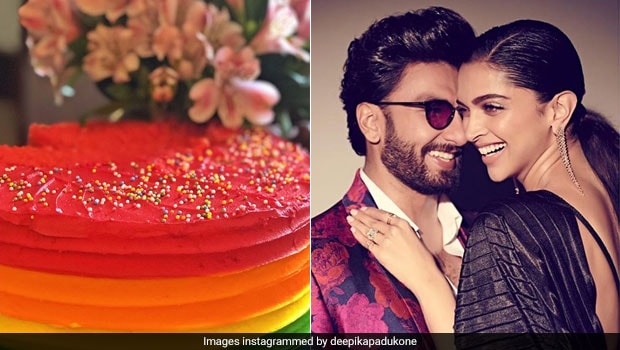 Bollywood actor Ranveer Singh celebrated his 34th birthday on Saturday. The actor 'wowed' his fans by dropping a teaser poster for his role in a movie based on India's historic win in the 1983 World Cup. The poster came as an exciting birthday surprise from Ranveer for his fans and it created quite a buzz on the internet. The poster shows Ranveer Singh as legendary Indian cricketer Kapil Dev and the name of the movie is '83'. The poster has garnered a lot of praise for the striking resemblance that Singh bears with Dev in the snapshot. Ranveer shared a picture of his wife Deepika Padukone showing her face while she was 'high on cake'. But it's Deepika Padukone's posts to mark her husband's birthday that are winning hearts on the internet.

Deepika Padukone posted a throwback picture of Ranveer Singh as a kid, which went viral. She also posted a picture of his birthday cake, which looks delicious with separate layers of colourful rainbow frosting and sprinkles on top. Rainbow is the symbol of 'Pride' that is observed around the world in June for the rights of the LGBTQ community. Some fans are lauding Ranveer Singh's birthday cake for representing 'Pride'. International fashion designer Prabal Gurung commented on Deepika's post saying, "Happy pride."

Another fan wrote, "You also celebrated #pridemonth with his birthday." Many fans also left cheeky comments on the post indicating that the cake was inspired from Ranveer Singh's sartorial choices, which are often quite quirky and colourful. Some people even said that the colourful cake is a reflection of Ranveer Singh's colourful and high-energy persona. "Colorful! Perfect Cake For Ranveer Singh!", wrote a user in the comments. "Cake is as colourful as @ranveersingh", wrote another. Whatever the reason behind all those colours on the cake, we sure like it.