On his birthday, Ranveer Singh surprised his fans by releasing the first look of '83', where he can be seen swinging the ball like Kapil Dev. 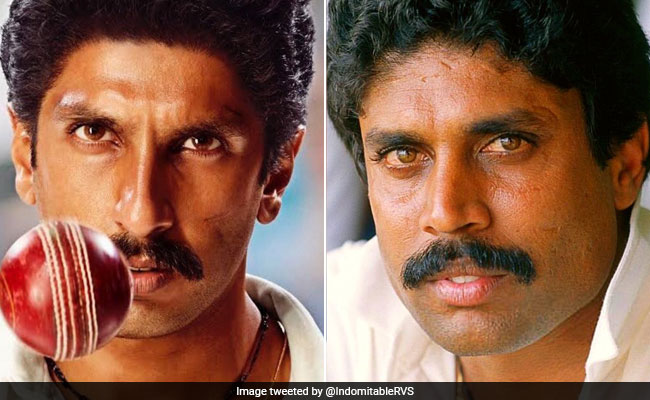 Actor Ranveer Singh is ringing in his 34th birthday today. Ranveer Singh had a golden run at the box office with Padmaavat and Simbaa last year, started 2019 with a bang with 'Gully Boy' where he played the role of a rapper from slums. His character was loosely base on the lives of Mumbai-based rappers Divine and Naezy who started writing raps about the lives in Mumbai slums and became national sensation. In in upcoming film '83', Ranveer Singh would seen essaying the role of former Indian Cricketer Kapil Dev. '83' is based on India's iconic world cup victory in Lords in the year 1983. The film also stars Saqib Salim as Mohinder Amarnath, singer Harry Sandhu as Madan Lal and Ammy Virk as Balwinder Sindhu. On his birthday, Ranveer surprised his fans by releasing the first look of 83, where he can be seen swinging the ball like Kapil Dev. Fans and industry peers cannot stop gushing over the uncanny resemblance. See the first look yourself and decide!

How Ranveer Singh Prepared For '83': His Fitness And Diet Secrets

Ranveer Singh is known to immerse himself in the character he plays. For his role in Padmaavat, where he played the role of Alauddin Khilji, he isolated himself for over a month to work upon his stance, posture and voice modulation. For his role in Gully Boy, he spent considerable amount of time with rappers in Dharavi. For '83', Ranveer Singh along with the ensemble cast of the film headed to Dharamshala for a special boot camp where they trained for cricket. Members of the 1983 World Cup Squad helped Ranveer Singh polish his bowling and batting.

Ranveer in an interview admitted that he is really enjoying the new athletic regimen he is on currently. Under the tutelage former Indian cricketer Balwinder Singh Sandhu, he has been honing his cricketing skills. His regimen is a mix of skills, training and physical conditioning, he revealed in an interview to a leading tabloid. The actor practiced for about 2 hours every alternate day to prepare for his role.
His diet too was tweaked according to the demands of the role. For his agile and athletic body, Singh included a good amount of protein in his diet. Protein helps build muscles and prevents chances of weight gain. Instead of 3 big meals, Ranveer's meals were split in multiple small meals that he had in regular intervals. He snacked healthy, his evening snacks usually comprised nuts and fruits. He also kept his dinner low in carbs.

Here's wishing Ranveer Singh a very happy birthday, hope you get to munch on all your favourite treats for the day.