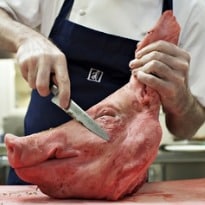 A new exhibition highlights chefs' ideas about avoiding waste, including dishes such as mackerel scratchings and bin-end pilaff

Waste is the most pressing problem in modern food (unless you don't have enough of it - but that's another post). Home cooks are endlessly lectured about cutting back the 30% of usable food we are said to throw away. The government-backed Wrap agency, with its Love Food, Hate Waste campaign, has been at the job for 14 years. Now the supermarkets are issuing their own finger-wagging advice (which is sort of hypocritical, because it is in food production and retail that most waste occurs). Tesco admitted recently that it throws away 30,000 tonnes of food a year - including a third of all the bags of salad it puts on sale.

At the restaurant level it is all rather different. For a start, food is a relatively minor expense compared with staff costs and premises. The more high-end restaurants make little, if any, money on their food; the profit is in alcohol. Good restaurants order ingredients according to what the bookings and experience dictates, and managers hold chefs to account if they have overdone the buying.

So avoiding waste becomes more of an issue of pride and morality - that, at least, is the attitude of five big-name chefs who have contributed ideas to a photo exhibition and conference being held in London this week by the Sustainable Restaurant Association and the Dutch embassy.

The results are dishes of ugly fish, wonky carrots as served at Grain Store, mackerel scratchings, prawn heads, cuttlefish testicles prized by chef Peter Weeden and some of the far extremities of farm animals. Wahaca's Thomasina Miers came up with dishes to make the most of Sunday roast leftovers, and Henry Dimbleby made a "bin-end pilaff".

Last month I watched two Michelin-starred Andrew Fairlie working in his kitchen at the Gleneagles hotel. "Using the whole beast is a great way to cook," he said, pulling out a bucket of pink pigs' tails. "It's cost effective. Buying local? Using the whole beast? It drives me mad when people boast about these things. Any self-respecting chef should be buying local and using as much of the animal as possible."

Fairlie cooked us his glorious "pig bits" signature dish. It is a celebration of the far ends of the animal, so often discarded in Britain, though not in more sensible places such as Thailand or China. On the plate you get a series of intriguing riffs - roulade of head, confited and smoked pork belly, crispy pig's tail, creamy boudin noir - served with crispy bacon, jus, tarragon mustard and caramelised apple. "We're using every bit of the pig except the bones."

This parade appears on the menu simply as assiette de porc. It has been a favourite since Fairlie opened his restaurant at Gleneagles 13 years ago, outselling every other main course. Over the years, the only change is that the medallion of pork loin was dropped. Customers wanted the odd bits.

In the kitchen, we watch Fairlie's chefs prepare the different elements of the dish. It is time-consuming. "Most of the expense is the labour," he says. But the ingredients are insanely cheap. Pig heads are just 50p each. The big bucket of pigs' tails were free from the supplier. From that bucket and six heads will come as many as 140 portions, the main part of a dish selling for more than £20. You'd have thought the economics of that might inspire a canny restaurateur - but, of course, there are some fine old-fashioned skills needed.

"The young chefs need to be taught. We had this young guy, 26 or so, he's worked in some great restaurants but this was the first time he'd seen a whole pig's head. He was so excited. Boning a pig's head is an amazing skill.

"Chefs have to understand the anatomy of the animal. It drives me nuts when you see people chucking the head of a beast away. Go to the farm, meet the farmer, see what he goes through. You wouldn't toss good food away again."

Campaigner and author Tristram Stuart sees tackling food waste as a global crusade. "We, the people, do have the power to stop the tragic waste of resources if we regard it as socially unacceptable to waste food."

He quotes the recent report by the Institution of Mechanical Engineers, which estimated that 30-50% of the 4bn tonnes of food produced globally each year never reaches a human stomach due to "poor practices in harvesting, storage and transportation, as well as market and consumer wastage". Even a partial solution would go a long way to solving the problem of feeding the nine billion people expected to inhabit the earth by 2050.

How to get started: ask your butcher for a pig's head and do this, with advice from St John's Fergus Henderson. Sourcing cuttlefish testicles may be a little harder.