Happy Birthday Amrita Rao: Foodie Secrets Of The Vivah Actress You Would Love To Know

Happy Birthday Amrita Rao. Here are some of our most favourite foodie moments of Amrita Rao 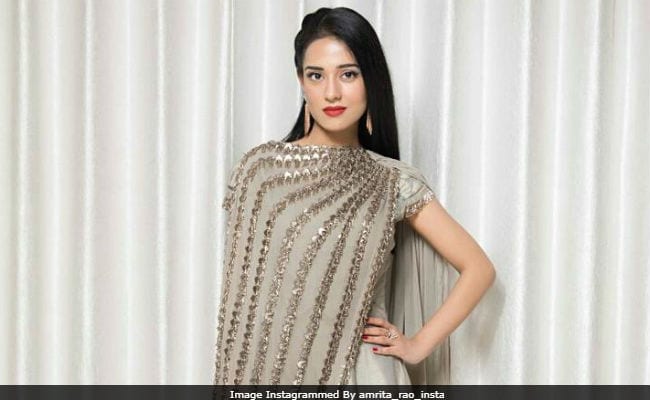 Highlights
Actress Amrita Rao would be ringing in her 37th birthday. The actress who made her debut in the year 2002 with 'Ab Ke Baras', rose to fame with her stellar performance in 'Ishk Vishq' where she co-starred with debutante Shahid Kapoor and Shenaz Treasureywala. Her sensitive portrayal of Payal won hearts of critics and masses, alike. Rao became a household name with Main Hoon Na, Vivah and Jolly LLB, and established herself as India's most loved 'girl-next-door'. Amrita forayed in television too with 'Meri Awaaz hi Pehchaan Hai' an Indian musical drama television series. Amrita also has a massive social media presence. Amrita Rao, since her first movie has been known for her fit body, but there is her foodie side that you sure cannot miss. Did you know Amrita has never been on a strict or crash diet to be as fit and fab? Yes, we are jealous too. But, what to do, not everybody is blessed with a metabolism as great as Amrita.

Amrita is a vegetarian and has been associated with PETA, too, wherein she has slammed the meat-based diet and encouraged her fans to go for a plant-based diet. In one of her interviews, Amrita said that she absolutely loves ghar ka khana and curd rice is one of her favourite comfort food. She mostly prefers to carry home food to the sets. Amrita's favourite cuisines are Mangalorean and Thai. In an interview, she admitted that she has an inkling towards coconut-based gravies. Here favourite restaurant is Out Of The Blue in Bandra, Mumbai, she revealed in the same interview. Amrita is said to be very fond of chaat and can apparently bakes amazing cakes too.

She often gives a glimpse of her foodie side on her social media account too. Here are some of our most favourite foodie moments of Amrita Rao

Promoted
Listen to the latest songs, only on JioSaavn.com
That's her enjoying a lip-smacking orange popsicle.  There, there we saw you slurp too!

"#Happiness is Sun, Sand And  A Drink In My Hand #HelloSummer #SumerStateOfMind", she captioned her image sipping into a delicious drink"

That's Ms. Rao at St. Regis Mumbai, waiting for her Japanese spread by the breathtaking view.
"Japanese on my mind#Yuuka 37thfloor @stregismumbai#SkyDining",  she captioned the image.

Comments(Also Read: Does Ketogenic Diet Work? These 5 Celebrities Sure Think So!)


Here's wishing Amrita Rao a very happy birthday, may you get to enjoy all your favourite treats for the day.

Viral: Smart Tablecloth Suggests What To Cook With The Ingredients Kept On It
Sharad Purnima 2020: Make Bengali-Style Payesh For Kojagari Purnima Bhog (Recipe Video Inside)