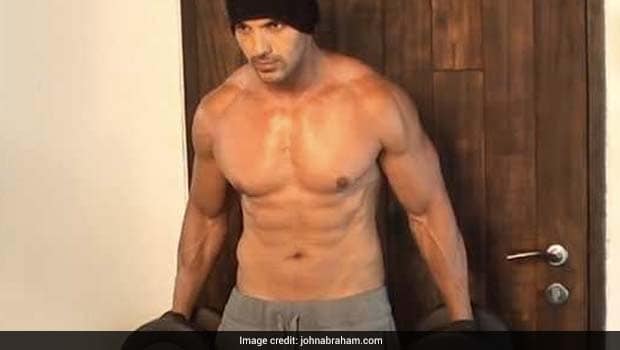 Bollywood actor John Abraham turns 46 today and let's just all admit that the 'Parmanu' actor doesn't look a day older than 30! The actor's recent movie 'Satyamev Jayate' has crossed 100 crores in earnings on the box office so he has had a great 2018. The super fit actor has had an ardent fan following ever since his Bollywood debut - not just because of his drop dead gorgeous looks, but also because of his well-toned physique, which he has sported in almost every role that he has played on the silver screen. John Abraham's amazingly sculpted torso has become synonymous with his brand and when it comes to fitness, it's safe to say that John Abraham can give some of the most successful actors in the industry, a run for their money. Abraham has achieved an almost demi-God-like stature in the Hindi film industry, due to his enviable body.

But it hasn't come easily at all. John Abraham has worked very hard on his body through a dedicated diet and fitness regimen that ensures that not even an inch of fat is visible in the wrong places. The actor's next project 'Batla House' promises to present him in a brand new intense avatar. On his birthday, let's take a look at some diet tips and secrets that allow John Abraham to stay in shape.

John Abraham firmly believes that in order to stay fit, around 60 percent depends on the diet and 40 percent is dependent on a person's workout regime. This is why Abraham has a strict healthy diet that keeps him in shape. Talking about the importance of a healthy diet, Abraham says on his official website, "Pay attention to your diet. Eat on time and eat the right food. When you eat right, everything about you is better, especially your skin and hair!"

Here are some diet tips that John Abraham swears by to stay in shape:

1. Never Skip Breakfast: Abraham has revealed on his personal website that despite his hectic schedule, he never skips breakfast. He advises including eggs and fruits in one's breakfast in order to supply the body with protein and fructose.

2. Keep Snacking Healthy: Abraham says that in order to keep his metabolism up, he snacks at the end of his workouts. He says that the secret to his energy levels is that he prefers to munch on something healthy throughout the day.

3. Don't Do Away With Carbs: John revealed on his website that he doesn't believe in cutting out carbs completely. He advises people to instead consume them earlier in the day, so that you have the rest of the day to burn them off.

4. Indulge, But In Moderation: Abraham revealed that he loves food as much as the next person and has a particular fondness for chocolate. However, he says he keeps his indulgence to a minimum. "There's nothing wrong with an occasional treat, but 'occasional' doesn't mean every day," he says.

5. Drink Adequate Water: John Abraham warns six pack ab enthusiasts to slow their rolls when it comes to achieving that 'chiselled look'. He says that whenever he does a bare body shoot, he reduces his intake of water, salt and sugar drastically for a couple of days before the shoot. However, he warns that doing the same for a longer period is 'potentially harmful.' Talking about the benefits of drinking adequate water, Abraham says, "..muscles need water to help them grow. Water also flushes out impurities, improving your skin, energy levels and brain function. You should drink at least six glasses a day and always rehydrate after a strenuous workout."

Also Read: 4 Amazing Benefits Of Drinking Water (and Why You Should Skip Cold Water)

So, now that you've heard it straight from the horse's mouth, there's absolutely no doubt that one can never compromise on a healthy diet in order to stay fit. We wish John Abraham a very happy 46th birthday and wish he continues to inspire us to eat healthy look our best!