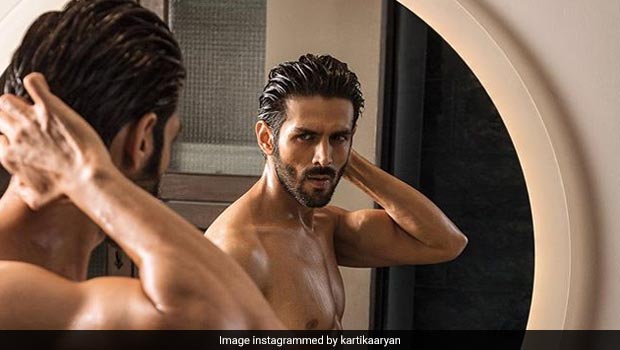 Bollywood actor Kartik Aaryan is celebrating his 30th birthday today. The dapper actor, who is known for his roles in the 'Pyaar ka Punchnama' movies, is going to be seen opposite Kriti Sanon in 'Lukka Chhupi' next. The actor was shooting in his hometown Gwalior for the same and he created quite a wave among his fans in the city. The good-looking actor also seems to be a gym freak, as is evident from the multiple workout videos he has posted on his Instagram page. We're all fans of his lean torso and fit physique, which he obviously works very hard to maintain. Recently Kartik Aaryan made headlines after 'Kedarnath' actor Sara Ali Khan said that she would like to date him. This statement of Sara Ali Khan sent a wave of excitement among the netizens, who seemingly started shipping this good looking duo already. Well, we aren't complaining either!

Coming to Kartik Aaryan, the actor seems like he takes a lot of care of his diet and maintains a strict fitness regime in order to look as physically fit as he does. Here is a look at birthday boy Kartik Aaryan's diet and fitness routine, which you all may want to steal.

The actor told NDTV in an interview that the one diet tip that he follows without fail is the consumption of lukewarm water with lemon and honey first thing in the morning, because he believes that it helps in cutting fat accumulation. He also said that staying hydrated is very important to keeping fit. He might be keeping his daily diet austere and simple, but he sure doesn't shy away from indulging once in a while. Here's a look at Kartik Aaryan enjoying a plate of fries and drinks during a midnight swim in Singapore:

And, of course, when it's his birthday, he doesn't mind bingeing on some delicious cake. This year, the dapper actor rang in his birthday at home, with his family. Have a look:

The actor confessed in an interview with a leading newspaper that he has frequent sugar cravings and that there was a time when he 'lived for desserts'. However, now Aaryan has learned to deal with the temptation of junk food. The vegetarian actor includes a lot of protein-rich foods in his diet and eats every two hours. He tries to keep his carbohydrate intake to a minimum and has cut out milk and sugar. He doesn't drink regular tea or coffee, but instead opts for green tea to boost metabolism.

Let's just admit it - it's not easy to look the way Kartik Aaryan does and not everyone can workout the way he does either. The actor reportedly does 200 push-ups every day! Skipping is another form of workout that Kartik Aaryan incorporates in his daily routine. Additionally, he does leg crunches, cycling, crunches on the weights and crunches with weights, and he also prefers mountain-climbing as a form of exercise. No wonder Kartik Aaryan is able to sport the sculpted body that he does, all the time!

Well, we wish the charming Kartik Aaryan a very happy birthday and hope he keeps inspiring us to stay fit and look our best.