Herby Biscuits With a Pedigree I Can Relate to: Recipe 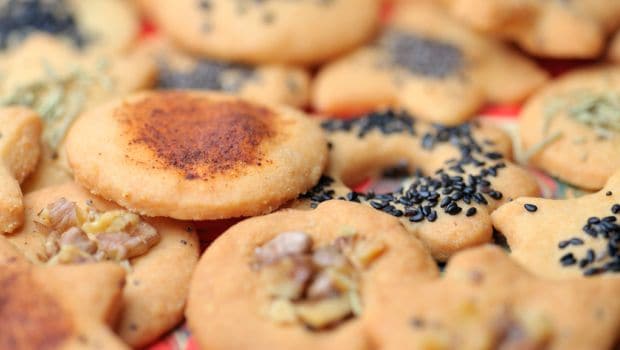 Highlights
I am admittedly not much of a baker, so even the idea of making biscuits for Thanksgiving was a little daunting. As a kid, I slathered soft butter on steaming buttermilk biscuits or chunks of corn bread around the family table. But now that I look back, I'm pretty sure those were simple, delicious Bisquick biscuits, which weren't going to wow a gathering of food obsessives.

So I began searching online for recipes by famous food professionals, imagining the crowd oohing and aahing over my buttermilk biscuits loaded with bacon or pimento cheese as I demurred, "Oh, this is Ed Lee's/Sean Brock's/whoever's recipe," as if I had casually called my buddy the chef for closely held intel.

After the first two attempts at biscuitmaking didn't quite work out, though, I decided to bring things back closer to home.

In 1963, Annapolis's historic Hammond-Harwood House Museum published "Maryland's Way," a cookbook packed with hundreds of recipes dating to the colonial era. My mother refers to it as "the bridal cookbook" because, she says, "in the '70s, everyone I know got a 'Maryland's Way' for either a shower or wedding gift." The copy she handed down to me was a present from her college roommate.

These days, some of the recipes in this family heirloom would be of use only to people who work in kitchens at living-history museums: The traditional Maryland Beaten Biscuits, for example, require the dough to be whacked with the flat side of an ax for 30 to 45 minutes. I was more intrigued by the Rosemary Biscuits, because I have those fragrant herb bushes spreading throughout my front garden.The rosemary adds an earthy, piney flavor to a basic biscuit recipe that originally skewed a bit sweet, so I cut back on the sugar. It complements the other herbed dishes that frequently show up at this holiday's feasts. And I like knowing where this recipe comes from, because, after all, Thanksgiving is really about family traditions.

Be sure to chop the rosemary as finely as possible, for even distribution in the dough and to avoid a bite with tough or chewy bits.

To reduce the need for re-rolling, we used a sharp knife to cut the slab of dough into squares. You can use a 2-inch round cutter as well. These are best served when freshly made.

It helps to roll these on a cold surface; lay a large sealed zip-top bag of ice cubes on your surface for 15 minutes beforehand, then remove and wipe dry before you dust the surface with flour.

Preheat the oven to 375 degrees. Line a baking sheet with parchment paper or a silicone liner.
Combine the flour, baking powder, salt and sugar in a food processor; pulse a few times to incorporate.

Lightly flour the (preferably chilled) work surface. Transfer the dough there, rolling it out to a rectangle about 8 inches wide and about 9 inches long, with a thickness of 1/2 inch. Use a very sharp knife to cut into 16 squarish biscuits, rerolling scraps as little as possible.

Arrange the biscuits on the baking sheet, spacing them at least an inch apart. Bake for 12 to 15 minutes or until puffed and golden brown.