How Millennials are Cooking up New Thanksgiving Traditions 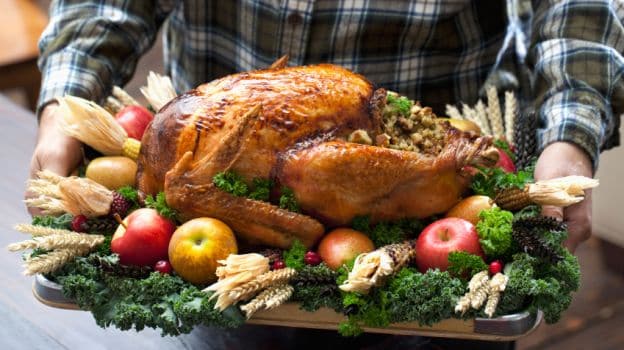 If your holiday plans include friends or relatives from the millennial generation, odds are high that you might find a few less-than-traditional dishes on the Turkey Day menu: A recent Yahoo Food survey of more than 1,000 Americans age 18 and older showed that 20- and 30-somethings are driving a Thanksgiving dinner (r)evolution.

This probably should come as no surprise. Millennials - so often snarkily stereotyped as "entitled" or " bratty" or the "me, me, me" generation - are undeniable agents of change in culture, politics and the cities they live in. Why not Thanksgiving menus, too?

But what does this mean for a holiday steeped in tradition? It may mean pork instead of turkey, or more vegetarian options, or new twists on time-honored staples. Millennials (anyone currently age 18 to 34, per the Pew Research Center) are more likely to offer up more healthful versions of traditionally gluttonous recipes. They indulge in other ways, however: Although a notable 20 percent said they plan to skip alcohol this year, millennials are far more likely than their elders to have a seasonal cocktail or three with dinner.

Are these fleeting fads, or a glimpse of Thanksgiving Future? As boomer parents pass the hosting baton to their kids, millennials are assuming more control of the holiday program: Fifty-two percent will host their own dinner this year (vs. 41 percent of non-millennials), and most will invite friends to join in (Thanksgiving is no longer a family-only affair - witness the growing popularity of Friendsgiving). So the Thanksgiving spread increasingly reflects the discerning palates of a younger generation.
After reviewing the survey results and consulting with a few millennials, we found that a few key trends stood out:

The relationship between millennials and the Thanksgiving turkey is no longer exclusive. Nearly half of all surveyed millennials - 44 percent - plan to serve ham instead of or in addition to turkey this year. Maybe Liz Lemon's ham obsession left a lasting cultural impact?

Or perhaps it's because 20- and 30-somethings are more likely than their elders to attend more than one Thanksgiving celebration - and who wants to eat the same thing twice?

Andrew Kohout, 33, of Laytonsville, Md., and his wife are hosting one Thanksgiving dinner and attending another, so non-traditional entrees such as ham (and Tofurky and smoked turkey) have found their way onto the family menu to avoid repetition, he says.

But it was definitely the young adults in the group who decided that it was time to add ham. "My mom wouldn't have done that," Kohout says. "Everyone has a different opinion on what they'd like to eat now. It's sort of like the whole craft beer movement - everyone expects things to be catered to their own liking."

If you favor a homemade cranberry relish or the still-shaped-like-the-can-it-came-in variety, you're among a dwindling number of fans: The survey shows that the staple side dish is falling out of favor across the board, but especially among millennials, who are twice as likely not to serve it.

That sounds about right to Washington resident Amanda Cutright, 31, who will be hosting Thanksgiving for her family and friends and has no qualms about leaving cranberry sauce off the menu.
"The first year I served Thanksgiving, I cooked all these fancy cranberry sauces. And we decided that we didn't like any of them," she says. "Then, the past two or three years, we just forgot about it. So I won't serve cranberry sauce this year."

It's no shocker that the vast majority ofAmericans are still serving an actual turkey on Thanksgiving. But 10 percent said they're substituting or adding a meatless entree, and millennials are three times as likely to dine on Tofurky than their elders.

Vegetarian Michaela Friedman, 27, says her family will be sticking to the traditional menu lineup this year, but she's planning to prepare her first Tofurky. It may not win any converts, but she's going to give it her best shot.

"I will hope to make the Tofurky taste good enough for all types of eaters," she says. "Fingers crossed!"

A 21st-century Thanksgiving includes way more options for vegetarians. Vegan nutritionist and District of Columbia resident Alexandra Dawson, 26, says she has found a way to add plenty of plant-based sides - such as roasted root vegetables and brussels sprout Caesar salad - to the Turkey Day menu. When she joins her Midwestern in-laws this year, her vegan cornbread pudding stuffing will have a place at the table.

"It's a really big deal that I now get to provide a stuffing, because my mother-in-law's amazing stuffing is a family tradition," she says.

Twenty- and 30-somethings are also more likely to make their sides a little healthier and classier - if they do serve cranberry sauce, it'll probably be fresh vs. canned, the survey showed. Other classic dishes also are getting gourmet upgrades, millennial interviewees say. Broccoli casserole? Made with gruyere in lieu of Velveeta. Sweet potatoes? Skip the marshmallows, add real vanilla bean instead. Millennials may show up for Thanksgiving in jeans, but their cooking is anything but casual.

Roasting the turkey is still the most popular way to prepare the bird - but primarily among older folks. Twenty- and 30-somethings are more likely to branch out and plunk the turkey into a deep fryer or smoke it, the survey found.

Josh Bonnin, 34, an assistant soccer coach at the University of Maryland, says that his family had followed his grandmother's traditional turkey recipe for decades. But a couple of years ago, after she passed away, Bonnin gently suggested that they deep-fry a turkey instead. This caused some nostalgic angst at first, but his parents eventually agreed to try something new, he says: "So we made one, and now it's a new tradition."

Cutright also is planning to switch preparation methods this year. "We've roasted in years past, but this year we're deep-frying one turkey and smoking two turkey breasts," she says.

As for parental concern about these plans, they have nothing to do with culinary preferences, she notes, saying: "My mom is just a little worried that we might burn down the house."

Don't worry - some things don't change: Pumpkin pie easily secured the title of America's Favorite Thanksgiving Pie, according to the survey. And our 20- and 30-something interviewees agreed.
"We don't serve as many different desserts as we used to, but we still serve pumpkin pie," Cutright says.

Says Bonnin: "It's tradition and it's delicious."

And if you're 35 or older and suffering from lingering holiday growing pains, take heart. There's at least one indisputable reason to be thankful for millennials: The survey found that they're far more likely than their older counterparts to honor the "giving" part of the holiday by volunteering at a soup kitchen or donating leftovers to charity.

Promoted
Listen to the latest songs, only on JioSaavn.com
We'll raise a pumpkin spice martini to that.