How the Duffin, a Muffin-Doughnut Hybrid, is Provoking Cake Rage 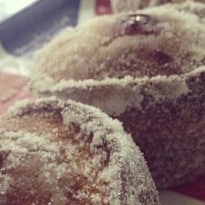 A couple of years ago American baker Bea Vo, proud proprietor of the much-admired London tearooms Bea's of Bloomsbury, crossed a doughnut with a muffin to produce a cakey kind of doughnut (or, if you prefer, a doughnutty kind of cake) filled with jam.

It wasn't a new idea - Nigella Lawson had a recipe for jam doughnut muffins years ago - but Vo's version, made with raspberry jam, buttermilk and nutmeg, proved popular with her customers, who christened it the duffin. It features in her 2011 cookbook, Tea with Bea, sells like hot duffins in her four cafes and on her website, and has been written about and referred to in media as diverse as the London Evening Standard, Zagat and NBC's Today show.

The duffin, says Vo, is simply "part of who we are and what we make". It is also just one of a whole galaxy of portmanteau patisserie that is now gracing our teatimes. There's the tartlet-brownie or townie, the cronut AKA doissant, a cross between a doughnut and a croissant, and its cousin the fauxnut, which uses a puff pastry instead of proper croissant dough. The crookie is a croissant-Oreo cookie hybrid; the muffle mingles muffin and waffle; and the macanut marries macaroon and doughnut.)

But Vo was nonetheless taken aback last week to be alerted via Twitter - where the whole affair, inevitably, has since spiralled into a #Duffingate - to the fact that no less a monolith than Starbucks had just launched a product that took "the best of a muffin - that moist texture, the iconic shape - and mixed it up with elements of a traditional jam-filled doughnut". It was filled with raspberry jam, had "just a hint of nutmeg added to its buttermilk base", and was called - oddly enough - the Duffin.

The multinational has gone further. Its factory supplier, Rich Products, a $3bn-a-year global corporation, has trademarked the name Duffin, which Bea fears could give them "the legal power to stop us using the name for our own creation". While conceding that "since we launched ... we've started to hear about a few other versions out there", Starbucks has told her it "conducted an extensive search online and a full trademark search" and found "no indication that anyone else was using the name, nor retailing a similar product".

Bea points out that a Google search for "duffin cakes" or "doughnut muffin duffins" instantly returns several dozen references to her own product. "I never thought I would be put into a position like this," she says. "I never trademarked the name duffin because I didn't think it was necessary. We are a tiny independent - can we afford to fight this trademark and any future cease-and-desist letter? No."

Starbucks says it won't use the trademark to stop Bea's selling duffins. And it's probably just as well: judging by comments on Twitter and Starbucks' blog, a lot of people sympathise with Vo.

Photo - The duffin: features in the 2011 Tea With Bea cookbook - and now, as the Duffin, in a Starbucks near you. Photograph: Bea's of Bloomsbury/Instagram