How to cook with lemon | Back to Basics 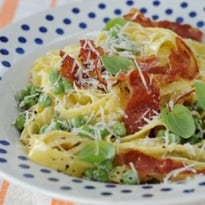 The lemon is almost magical. Its fragrant tang transforms the most mediocre meal into a masterpiece. It rightfully belongs on the table with salt and pepper. Think we're taking the pith? Read on...

My wife was a late developer in many ways. She learned to ride a bicycle aged 32, took her driving test at 38, and started procreating around the same time. Now, we have three kids and a very dented car.

Another thing she learned late in life is the value of a lemon. Always a good cook, she had a Damascene moment one day when, looking for a way to perk up a slightly flat pasta dish, she gave it a squeeze of lemon. "To me, it was a revelation," she says. "The sharpness completely transformed the flavour. Now it's the first thing I reach for when my cooking isn't working." The lemon is like a firehose of flavour - just fire it at drab dishes and it saves them.

The seasoned cook may not be surprised by this, but to the beginner the transformative properties of lemon are miraculous. One chef friend, a holder of three Michelin stars, claims that every dish is bettered by a squeeze of lemon just prior to serving. "It is a very fine line between a delicious dish and a mediocre one," he says. "A squeeze of lemon often helps you cross that line."

You should think of lemon as the third seasoning, along with salt and pepper. I challenge you to try a squeeze on literally everything you cook this week and see how it transforms the flavour.(We keep a large pile of lemons in a bowl by the cooker, ready for emergency squeezing.)

And while the juice lifts and freshens, the rind can be used to deepen fragrance and add depth. Grate some rind into risottos, pasta sauces, stews and puddings (but don't grate too deep - the white pith doesn't taste good.)

This week's recipe is an example of a classic lemon dish that I hope will become your life-long companion. Put a ring on it. It's a keeper.

Fettuccine with peas, prosciutto and lemon

1 Slice the prosciutto into thin strips or shred using your hands.

2 Heat the oil in a small pan and fry the prosciutto strips for a few minutes over a medium heat until crisp. Remove from the pan with a slotted spoon and set aside on a strip of kitchen paper.

3 Reduce the heat. Add the garlic, stirring well and cook for a minute, but don't let the garlic brown. Add the creme fraiche, then the lemon zest and juice. Stir well and turn off the heat.

4 Cook the pasta in lots of boiling salted water according to the packet instructions. A minute before it is ready, tip in the frozen peas and simmer until the pasta is cooked - it should still have a little bite (al dente). Drain the pasta and peas in a colander, reserving a small cupful of the cooking water.

5 Return the pasta and peas to the pan, tip in the creme fraiche and toss together with tongs. Stir in the parmesan and reserved crisp prosciutto.

6 Shred the basil either with a knife or with your hands and toss with the pasta. If you feel the mix is too dry, add a little of the pasta cooking water and mix together. Serve.

This recipe is open to infinite variations.

In place of the peas:

• Any green vegetable. Most will have to be precooked. Kale - boiled, drained and sliced finely - is delicious. As is broccoli (when you precook it let it go a bit soft so it absorbs the juice better).

• When in season, add cooked asparagus, cut into 2cm pieces, and/or broad beans along with the peas.

• Finely slice lamb's or cos lettuce and fry it with the garlic.

In place of prosciutto:

• Bacon sliced and fried until crisp.

• Cherry tomatoes cut in half and fried quickly in olive oil until slightly soft are surprisingly good (you may need to use less lemon as the toms themselves are sharp).

• Add strips of smoked salmon to the lemony creme fraiche - and double cream will work just as well as creme fraiche. You can also leave out the cream altogether.

• Try herbs other than basil. Soft herbs are the obvious choice (parsley, chives, or mint), but sage finely sliced and fried until crisp with the prosciutto is good. And rosemary, very finely chopped, also works well.

Photo: The transformative powers of the lemon work wonders on this easy fettucine with prosciutto. Photography: Jill Mead for the Guardian