How to Eat a Persimmon 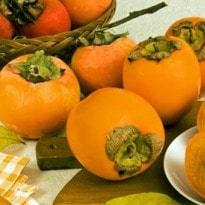 Sales of the fruit have more than doubled in the UK in the last year. What's the attraction - and what's the best way to eat one?

Our fruit bowls are becoming more adventurous. Having embraced the kiwi, the mango and the pomegranate we are now, it seems, passionate about persimmons. Supermarkets including Asda reported sales of the yellowy-orange, usually tomato-shaped fruits more than doubled last year to more than 4m, making them the fastest-selling exotic fruit in the country.

The persimmon, sometimes called the sharon fruit (the slightly unfortunate name given to one of its varieties by Israeli growers) has much to commend it. Persimmons are high in beta carotine and minerals such as sodium, magnesium, calcium and iron, and studies have found that they also contain twice as much dietary fibre per 100g as apples, plus more of the phenolic compounds thought to ward off heart disease.

It also tastes delicious - providing you know what you're buying, and eat it at the right moment. Produced mainly, these days, in China, Korea and Japan, but with varieties also found in America, southern Europe and even Britain (where, known as the date-plum, it is has grown since 1629), there are actually two main types of persimmon: astringent, often called hachiya persimmon, and non-astringent, or fuyu.

You need to know which you're dealing with: while non-astringent varieties can be eaten, firm and crisp, while barely ripe, the astringent kind - rich, sweet, spicy - are mouth-puckeringly tart until fully ripe. Fortunately, it's not hard to tell when a Hachiya persimmon is ripe, a process that may take several weeks: they should be so soft that their sweet, almost jelly-like flesh practically bursts through their skins. (You can hasten ripening by leaving persimmons in a paper bag along with an apple, which produces extra ethylene to soften the fruit.)

As far as eating them is concerned, fresh fuyus are generally firm enough to slice and munch like an apple (peel them if you prefer, but the skin is perfectly edible); they work well in salads or baked in pies and cakes. Hachiyas, on the other hand, are often too squishy to bite into without making a mess: better cut them in half and spoon out the flesh, or use them in jams or compotes.

Few British chefs seem to have yet discovered the joys of the persimmon, but American homemaking guru Martha Stewart has some enticing recipes on her site, including watercress salad with persimmons and hazelnuts, persimmon white chocolate bread pudding and broiled persimmons with mascarpone.

Persimmons ... how do you eat yours? Photograph: Alamy