How to eat: Christmas dinner 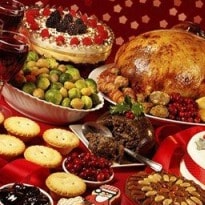 Ditch the turkey, the cranberry sauce and the Christmas pudding ... has Tony Naylor taken leave of his senses? This is his take on the perfect Christmas dinner - how do you eat yours?

Deck the halls with Blu-tacked tinsel! Hark to the sound of melting credit cards! Yes, it's what we're contractually obliged, by Noddy Holder, to refer to as Chriiiiiisssstttttmmmmmaaaaaas. Which, with a kind of dread inevitably, means that How to Eat is tackling Christmas dinner. Yes, the Word of Mouth series trying to establish the ideal forms of Britain's favourite dishes is going deep on turkey and its assorted trimmings. Below the line, please remember that this is the season of goodwill, which even includes those fools who love cranberry sauce. Yes, even them.

Turkey? Schmurkey! I've eaten organic bronze turkeys reared exclusively on truffles and Classic FM in free-roaming paddocks that look like the 13th fairway at St Andrews, and you know what? They taste OK. A gazillion times better than your average frozen high-street bird, but just OK. And this for something that costs 12 quid a kilo, and which the average home cook - on the sherry since 10am - could easily incinerate.

What are the alternatives? Not goose (too much of a divisive gamey, livery twang); not duck (it's duck); not partridge (Asda was all out); and not pork (ordinary Sunday lunch fodder). No, you want rib of beef. Wing rib is marginally cheaper than a posh turkey; prime rib is the ultimate. Whatever beef you can afford will offer a bigger bang for your buck than bland, boring turkey.

Of course, that's the theory. But most people won't eat beef this year, because most people have no say in the matter. What's that? Take control, you say? Buy Mum The Female Eunuch and tell her to put her feet up? Perhaps you are cold enough to withstand that look of bereavement in her eyes across the dinner table. I find it easier to put up with her turkey crown and limp carrots.

So, with turkey you need sprouts (small ones, shredded and fried with bacon); glazed carrots; roast potatoes and parsnips. All sorts of things make a nice addition, particularly creamy things such as cauliflower gratin or dauphinoise, and there many, many other things, from red cabbage to mangetout, that have no role to play whatsoever. However, those four vegetables are your core. Cook them diligently and you have the perfect vegetal yin to the real yang of the show: the pigs in blankets.

Christmas dinner is really all about the chipolatas and the stuffing. Your stuffing must have a sausagemeat base and it must be savoury. Chucking fruits and spices into the Christmas dinner mix is a bizarre historical hangover. Pork, sage and shallot, or chestnut and pancetta? They're stuffings. Apples, dates, apricot, ginger, prunes, cognac? They're masochistic.

Gravy? Definitely. Otherwise that's one dry meal. Running out of gravy is a cardinal Christmas sin, second only to running out of booze. Condiments? Verboten! Theoretically, you could make a cranberry sauce that, spiked with orange and used sparingly, would provide a sharp counterpoint. But you won't. At the last minute, you'll grab a jar of something sickeningly sweet at the supermarket, better suited to a sponge cake. That's how they make £36bn out of us each Christmas. As for bread sauce, what is this? 1623? Made badly, it's like regurgitated rusk. Made properly, heady with cloves and nutmeg, it is another of those strange medieval flavours that has no place in the modern Christmas dinner.

To begin, something light that can be readied in advance: smoked salmon, pâté, soup. If you want to be flash, a zippy salad of dressed winter vegetables. The average Brit consumes 6,000 calories on Christmas Day. If you're looking to cut anywhere (and you'll have to prise that seventh Thornbridge Jaipur out of my cold, dead hand), cut Christmas pudding. That great, claggy lump of booze-sodden raisins is an endurance test. If you need a showstopper, one word: trifle. Better still, as your guests will be fit to burst, offer them cool, aerated relief - a bowl of ice cream.

3pm. It leaves just enough time for the nausea (from eating a selection box before 10.30am, topped up with three pints and a double brandy in the pub at midday) to subside, without interfering with the important business of the day - Corrie and EastEnders. Yet it still allows you to squeeze in a Christmas sandwich at about 10pm. This should include leftover turkey (look, it's been cooked, someone needs to eat it), ham, strong hard cheese and a little of that beer chutney someone thought was a better gift than actual beer (it wasn't).

A word on crackers

We're all suckers for the childish pleasure of pulling a cracker. And you can put that hat on for 10 minutes, if only to keep the peace. It won't kill you. But, please, do not spend big on upmarket crackers, hazardous candles, plastic yule logs and other overpriced table decoration tat. This year, Waitrose is selling six crackers for £40. No, that isn't a typo. As Robin Williams said of cocaine, when you're spending 40 quid on Christmas crackers, that's God's way of telling you you've got too much money.

So, Christmas dinner: how do you eat yours?