How to Eat: Kebabs 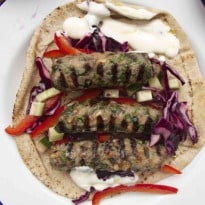 How to Eat has been on the lash. Now it's kebab o'clock. But what to choose? Doner or shish? Pitta or wrap? Cheese, chips or thermonuclear chilli sauce? And is it ever acceptable to eat a kebab sitting down?

Are you healthy? Weight conscious? Teetotal even? Then, please, click away now. How To Eat is back, and after last month's bacon sandwich bun fight, it's eight pints in, three sheets to the wind and swinging by its local takeaway to order a kebab. Think of this less as a blog, and more a fetid burp in the face of the Department of Health.

So, let's load-up that elephant's leg and, in memory of Maymut Aygün, get busy at the grill. Below the line, expect chilli exchanges, but let's keep it civil. It's late, we've all had a drink, no-one wants the shish to hit the fan.

Say what you like, but that grey hunk of finely-minced, mechanically recovered meat (and aren't you drooling, just reading that?), doesn't half taste nice. Or at least, decent doner does. We've all heard the horror stories and, generally, if the fat content of your kebab puts you in imminent danger of drowning, bin it and walk away. While you still can. But good doner, the sort where you can actually taste something resembling lamb breast, the meat expertly shaved into long moist ribbons, each edged with a crisp hem, is, in its dulcet, lightly spiced moreishness, one of the world's great comfort foods.

However, other kebab meats are available and, for me, doner will always come second to kofte. Cooked on a proper charcoal grill, those minced cigars of seasoned lamb, cut with parsley and a little onion, offer the juiciest bang for your buck. They also sit right in a folded "naan", the biggest kofte almost providing a handle for the inebriated diner to hold on to. For much the same reason, I can't tolerate shish. There is something about cubed meat that always leaves me feeling short-changed. The meat is always a shade dry, the kebab never feels full enough, and that's before you spill half its cuboid contents everywhere.

Well-travelled purists may swear by shawarma, with its authentic layers of actual, recognisable pieces of meat (oooh, get them!). True, it tends to be very tasty. But texturally? As a child of the 80s, raised on a diet of Kwik Save burgers and skinless chicken fillets, the presence of great flobby, gobbets of fat can still be a bit of a problem for me. I'm growing up. I am. In other contexts, I'm all over the fat. But, several pints in, I find the wobbly bits you get in lamb or chicken thigh shawarma a bit hard to stomach.

We're deprived in this country. In Europe, you'll find kebabs wrapped in lavash (like a Turkish tortilla, termed durum kebab), lahmacun (the Turkish pizza base) and, most brilliantly of all, tombik or gobit, those thick, pillowy grilled pitta, the ubiquity of which is one of the many reasons why Berlin is the pre-eminent European capital. Our pitta, thin, frozen, out of packets and god forbid wholemeal, are pitiable in comparison. Yes, because it's easy to hold, a pitta may make the most functional sense. Particularly when you're so pissed it's a struggle to get the right change out of your pocket. But if there's any moisture in your kebab, and there should be sauce, fat and meat juices galore, then that pitta is going to disintegrate before you're halfway through it.

No, it may require a certain skill (adopt The Stance, see below; fold in the bottom segment; grip both flaps across the middle - it's a DIY wrap, essentially), but it's much better to go for the "naan". Not that it should be an actual naan bread (too thick, too sweet). It should be a buttery, chargrilled Turkish naan or yufka, which is thinner and rounder.

Alternatively, you could have your doner meat on a burger bun. You could forgo bread and have it with chips and cheese. You could even make a doomed attempt to get all Gillian McKeith, and have it over salad. But, frankly, you would be wrong.

A perfect kebab, the kind you would eat sober, at 6pm, delivers a zigzag of brilliantly contradictory flavours: clean and spritzy, spiky, salty, ruggedly savoury. Which is why you don't want to smother it in a chilli sauce that's all raw, nostril-stinging heat.

Ask yourself this: what would fly in Istanbul? A thick piping of (garlic) mayo? Ketchup? BBQ sauce? Squeezy cheese? Sweet chilli sauce? Mustard? Tomato relish? Hayir! As the Turks would say. What you want is three things: lemon juice; a modestly cucumber-y, garlicky yoghurt sauce (akin to a very thin tzatziki), and a fresh chilli sauce that packs as much fruity tomato-based sweetness as it does expertly modulated heat.

Likewise, in general takeaways, there are usually a lot of things knocking about (from gherkins to that gastronomic leper, the bell pepper), which, particularly when drunk, might seem like a good addition. They aren't. If you think you're confused, now, just wait 'til you bite into the thing.

Such add-ons are only attractive, of course, because the "salad" served with most kebabs is derisory. A few limp shreds of browning iceberg and a quarter of Dutch tomato will not do. You want fresh veg in there: nicely cubed cucumber; earthy, mineral shredded cabbage; properly blanched onions; whole jalapenos (not withered and pre-sliced), and plenty of it. Whatever you're eating it should feel fat in your hand. No sniggering at the back.

Earlier, I may have given the impression that Europe is a pitta paradise. But, reading (on Wikipedia, natch), that the Belgians stick Marie Rose and aoili on their kebabs - together! - and the Norwegians top theirs with sweet corn, I am now seriously thinking of voting UKIP. And Norway aren't even in the EU.

No. You don't need chips with it.

Diet Coke, 7UP, Irn Bru or whichever soft drink you hope may take the edge off the morning after. When sober, beer is actually a great kebab combination, but, as yet, no one has had the foresight/ evil cunning to bring these two natural bedfellows together on a national basis. Craft'n'kebabs: crisp pale ales and chargrilled meats - who wouldn't love that? No wine, though. Sipping chablis with a kebab would be like cladding a wheelie bin in Swarovski crystals: utterly pointless and deeply ostentatious.

Most likely you will be eating your kebab on a street corner, in which case it is mandatory, that you adopt The Stance: stooping from the shoulders, chin jutted out in a (failed) attempt not to get chilli sauce down your shirt. It's not a comfortable way to eat, which is why, when the opportunity arises, I prefer to sit down in a takeaway - take in the League Two highlights on the TV - and eat my 'bab. I might even open it up and use a fork. Yes, that's how much of a pampered middle-class softy I am.

So, kebabs, how do you eat yours?

Promoted
Listen to the latest songs, only on JioSaavn.com
Photo: Guardian