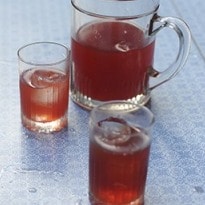 This cranberry punch is spicy, warming - and just right for making amends...

I want to apologise at last to Maurice for drinking his best wine. I didn't mean to do it, but it was wrong, and since Thanksgiving next week will be the 25th anniversary of what became known as "The Soaking", it is time to come clean.

Maurice, a distant family friend who I had never met and a bigwig in the American Republican party, had offered to put me and my friend Ed up in his New York apartment over that Thanksgiving weekend. Only Americans show such astonishing hospitality. It's one of their great strengths.

"I have to go away on business," he said, tossing us the keys to his pad just five minutes after we had arrived. "Help yourself to some wine if you like." And off he went.

We were 18. We found the wine with indecent haste. It was sitting in a rack behind a grand piano that was adorned by framed snaps of Maurice with every American president since LBJ. We tried to pick the cheapest bottle, based on the look of the label (I confess I still largely choose my wine this way). Then we panicked. Had we actually chosen the most expensive bottle? Had he even offered the wine at all? Just in case, we thought it would be a good idea to soak off the label, which in gut-wrenching half-memory I fear may have borne the word "Petrus" and, er, hid the bottle behind a box of cereal on the windowsill.

I've felt bad about it ever since so, if you're out there Maurice, I am truly sorry. Please come round to mine next week for a glass of this spiced cranberry punch. It's a Thanksgiving tradition, you know - spicy and warming. And if you can't make it next week, it also drinks well at Christmas - come then. Or send a distant relative. Anything to set me free.

Make your own spiced cranberry punch

1 To make the Cranberry juice. Simmer the cranberries in the water for 10 minutes. Strain through a colander lined with muslin. Do not press down on the fruit or the resultant juice will be cloudy.

2 Mix the strainedjuice with the sugar and orange juice and heat gently to dissolve the sugar. Cool.

3 In a large punch bowl mix your cranberry juice with the spiced rum and ginger beer.

4 To serve pour over ice in punch glasses.