How to Make the Perfect Lemon Posset 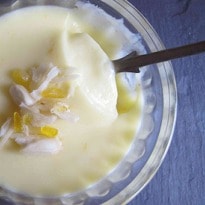 The posset is a medieval drink that has made a comeback as a modern dessert. Is it Britain's best creamy pudding - and have you tried any versions other than lemon?

The wonderfully named posset has been enjoyed for centuries, though you won't find it mentioned in Mrs Beeton's chapter on creams and jellies, or alongside Hannah Glasse's everlasting syllabub. Up until relatively recently, the term referred to a warming drink rather than a cooling pudding - the medieval equivalent of a bedtime cup of cocoa. Think of Lady Macbeth poisoning Duncan's guards with "drugg'd" possets - she certainly wasn't feeding them dessert.

In its earliest form, posset was made from milk curdled with alcohol or citrus juice: sack posset, with Spanish fortified sherry-style wine, was particularly popular in the 15th and 16th centuries. By the mid-18th century, however, the mixture tended to be thickened with ground almonds, crushed biscuits or egg yolks instead.

Having gone into a decline, losing ground to relatives such as the syllabub, the eggnog and the trifle, the posset has made somewhat of a revival on menus in recent years. These days, however, it's more like a citrussy fool than a frothy drink - though, made entirely with thick, rich cream, it's perhaps equally likely to send you to sleep happy.

The cream used for modern possets tends to be of the kind substantial enough to stand a spoon up in. I find two exceptions to this. The first comes from Dorothy Hartley's historical collection, Food in England, and is preceded by a quote from John Dryden on the medicinal qualities of posset. (As the first poet laureate, Dryden received some of his wages in sack, so perhaps he was a bit of an expert on the preparation of the posset.) Although no source is given, the recipe seems to be an old one, as it involves boiling up milk until it froths, then curdling it with "a gill of white wine". The curds are strained and seasoned to make something a little like a sweet, mild cottage cheese: not unpleasant, but bizarre to modern tastes.

The second comes from the Porters Seasonal Celebrations Cookbook, written by the owner of the Porters English restaurant, Richard, Earl of Bradford, and uses single cream and white wine, thickened with egg yolks over a bain-marie. It's light and milky, with a comforting, slightly custardy texture, but a bit sloppy for a modern posset; I prefer a more silky substance.

Where Porters and Hartley use wine, the other recipes use lemon juice to sour the mixture - which, according to my sources, is no less traditional. Having tasted a number, I decide I prefer the milder citrus flavour of Gary Rhodes' and Marcus Wareing's possets to the intense sweet and sour character of Claire Clark's version - she uses four lemons to 500ml of cream, while Rhodes uses only three to 900ml. Lovely as it is, Clark's posset is like eating lemon curd with a spoon - the mild sweetness of the cream is completely lost. Wareing also uses lemon zest in his posset, which gives it a quite different, more rounded citrus character that I really like.

Rhodes and Wareing boil the cream and sugar together, while Clark makes a syrup of lemon juice and sugar and adds it to the hot cream. This seems to give her posset a silkier texture - though I stir the other two diligently, they both have a slight graininess.

Tamasin Day-Lewis suggests using vanilla sugar, rather than caster. Given my crusade to stop the indiscriminate use of that spice, this is a clear no. Far more interesting, in my opinion, are the nutmeg and ginger suggested by Hartley, in a nod to the dish's medieval origins. I'm not going to add much, as these are spices that have a tendency to dominate, but, as with Wareing's lemon zest, when deployed with discretion they subtly enhance the entire dish. Wareing makes a spiced fruit compote to accompany his posset, which seems too much of a distraction, but I do like Clark's toasted flaked almonds and candied peel topping, which also supplies a pleasingly medieval feel.

Tips of the trade

Clark and Wareing both sieve their possets, which, though I'm sceptical, does seem to make a difference to the final texture. Clark also advises going over the top of the dish with a blowtorch to eliminate any bubbles before chilling. This does work, if you're averse to bubbles - without a Michelin star to maintain, I'm not too bothered.

Finely grate the zest of one of the lemons, then juice 1½ - you should have about 100ml juice, but juice the remaining half if necessary.

Put the juice and zest in a small pan with the sugar over a low heat and bring to the boil, stirring occasionally, until the sugar has dissolved. Keep warm.

Pour the cream into a small, heavy-bottomed pan with the spices and heat gently until it comes to the boil. Pour into the syrup, whisking to combine, then pour through a sieve into a jug.

Divide between ramekins and pass a blowtorch over the top if you're pernickety about bubbles. Allow to cool, then chill for a couple of hours until set. Add the almonds and peel just before serving - good paired with shortbread.

Who rediscovered the posset, and where did the modern version come from? Has anyone experimented with versions other than lemon (an ale posset sounds ripe for revival to me) - or, indeed, with any older posset recipes?