How to make the perfect plum cobbler 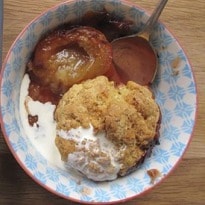 This homely American classic is a wild west fruit pie and delicious with plums. But where does the name come from?

The abrupt end of summer may have spoiled our picnic plans, but it does have its flimsy silver lining in the form of soft, summery fruit in warming, wintery puddings.

Blackberry granita is all very nice, of course, but so is clafoutis. Silky cool poached plums are always a lovely thing to have in the fridge, but plum duff isn't such a bad thing to sit down to after Sunday lunch either.

And, if like many people, you launched a little too enthusiastically into crumbles at the first breath of chill, then let me introduce the great American cobbler: the kind of wild west fruit pie you can knock up in the most modest little house on the prairie, or even from your covered wagon, should the need arise.

It's a very homely affair: stewed fruit cooked in a "dough of great thickness" according to one 1859 reference - though whether the name comes from the bumpy top resembling cobblestones, a cob loaf or even, in particularly tragic cases, shoe leather, we'll never know.

Homely or not, the cobbler has much to recommend it, with Tamasin Day-Lewis calling it "one of the finest puddings there is", and the classic American collection, The Joy of Cooking (75th anniversary edition), rhapsodising "while neither tidy or shapely, it is indisputably delicious". Which is reason enough to give it a try.

Peach or blueberry cobbler tend to be the standard fruit choices in the US, but homegrown peaches are in short supply here and our blueberries are on their way out. So I've decided to substitute seasonal plums instead, on the strength of an 1877 recipe from the Minneapolis-published Buckeye Cookbook, and a tip from Day-Lewis in All You Can Eat.

The Buckeye suggests using canned damsons, and indeed the fresh sort would no doubt be delicious with appropriate sweeteners, but as all my damsons this year have gone into gin, I've used the more abundant victoria variety instead - which in any case are closer in flavour to the peaches used in many of the recipes I'll be trying.

The New Best Recipes cobbler from the American magazine Cook's Illustrated suggests the fruit should be peeled "to avoid unpleasantly leathery bits of skin", but with plums I don't find this a problem: in fact, the peeled fruit seems to lack texture once cooked, though it just about holds its shape in the oven.

Stoning, though a tedious job, is worth it here - I give whole fruit a go in one recipe, in case the pits impart a particular flavour of their own, as is the case with cherries, but here they simply threaten to crack my teeth.

Cook's Illustrated also suggests baking the fruit before adding the topping, so the hot plums will cook it from below, avoiding any soggy bottoms. Jamie Oliver adopts the same tactic, and I'm going to follow suit - 10 minutes of direct heat on the plums also seems to concentrate their natural sweetness.

To avoid "a baking dish overflowing with liquid", Cook's Illustrated macerate their peaches to draw out the juices before cooking, then add a little of the juice back in later, along with some cornflour to thicken it. Though plums aren't quite as watery, this process does enhance their flavour, as well as allowing you better control over the consistency of the filling.

Thickener is a common element of cobbler recipes: the veteran Joy of Cooking (75th anniversary edition) suggests adding flour, but like Cooks Illustrated, I find this gives the syrup an unpleasantly pasty texture, especially when it's just tossed in with the fruit as the Joy suggests. Much better to whisk some of the juices with cornflour, as in the Cook's Illustrated recipe, so the two are already well combined before going into the dish.

The sugar and butter

Day-Lewis and Oliver both use soft brown sugar on their fruit, which I think is a classic combination with plums, lending the syrup a lovely treacley sweetness.

Cooks Illustrated add lemon juice, which I like - plums aren't the most acidic of fruit, so this gives them a welcome sharpness. Oliver goes for orange instead, and uses the zest too along with lime zest - orange is good with plums, but it doesn't supply the requisite sourness, and the zest adds a freshness I don't think is in keeping with the comforting nature of the cobbler.

Oliver also sticks in vanilla and fresh ginger, but if it's American, there's only one spice that will do, and that's cinnamon. Its aromatic sweetness is gorgeous with plums.

Originally, it seems, cobblers were enclosed fruit pies - the Buckeye version calls for a robust savoury lard pastry to line the dish entirely. It's tough stuff, perhaps better suited to jiggling around on a covered wagon than chiseling into at the dinner table, and too much like a common or garden pie for my liking. The other cobblers, all of which use a biscuit dough (much like a scone), in this case) to top the fruit seem far more distinctive a dish.

Because of this, the topping recipes tend to be fairly standard - some flour, a raising agent, and butter, brought together with milk or water. Cooks Illustrated and the Joy both go for a double whammy of raising agents by using bicarbonate of soda as well as baking powder, and activating it with yoghurt and buttermilk respectively (bicarb requires something sour to kick start it), and their toppings are both pleasingly light and fluffy, with the Joy nosing slightly ahead because of the slight tanginess supplied by the buttermilk.

Day-Lewis seems to use cream in the method, but as it's been cut off the end of the ingredients, I'm unclear whether this is single or double. I guess double, and end up with a lovely rich, but rather crumbly topping, which isn't quite as light as the previous two. Oliver adds ground pine nuts: his topping tastes heavenly, but remains obstinately flat for reasons unknown - having checked the use-by date on my flour, I'm interested to note several cooks online seem to have had a similar pancakey experience.

The Joy offers a number of different topping recipes, but out of curiosity I try the cornmeal version. It's a revelation; though only a fifth cornmeal, it has a lovely flavour, and a more interesting, slightly grainy texture - plus it feels very frontiersy. Theirs are quite savoury, however, and, given the relatively sharp flavour of my fruit, I think the topping should be sweet, to offer a contrast, so I up the sugar content, and also steal a tip from Day-Lewis and Cook's Illustrated and sprinkle the tops with a little more before baking, for extra crunch - preferably with toffee-ish demerara.

Syrupy, spicy baked plums, topped with fluffy cornmeal buttermilk biscuits are a dish well worth sitting through a few long dark evenings for. That said, if you've still got some summery ice cream left in the freezer, then the two would make perfect partners: cobbler a la mode, as they might say on the prairie.

Toss the stoned plums in the light brown sugar and leave for 30 minutes, stirring occasionally. Preheat the oven to 180C fan (200C/gas mark 6). Drain the plums, reserving the juice, and tip the fruit into a baking dish.

Whisk the reserved juice with the cornflour and stir in the lemon juice and cinnamon. Pour over the plums, and dot with butter. Bake for about 15 minutes, until softened.

Meanwhile, to make the topping, put the flour, cornmeal, baking powder, bicarb and butter into a food processor and whizz until the mixture becomes crumb like. Alternatively, rub the butter into the flour mixture.

Stir in the caster sugar and a pinch of salt, then just add enough buttermilk to bring it together into a firm dough - do this by hand so you don't overwork the mixture. Divide into small balls, flatten slightly, and arrange, spaced out, on top of the plums. Depending on the size of the dish, you may not need them all.

Sprinkle the balls with the remaining sugar, and bake for 30-40 minutes until golden and well risen. Allow to cool for 15 minutes before serving with ice cream, creme fraiche or double cream.

Cobbler, crumble, crisp: what's your favourite way to serve up the last of the summer fruit? And can anyone shed any light on the dish's unusual name?