How to Make the Perfect Prawn Cocktail 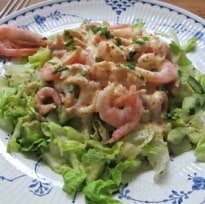 Do you have a soft spot for this retro classic? What kind of prawns do you use, is iceberg essential, and can any fancy sauces beat mayonnaise mixed with tomato ketchup?

The prawn cocktail has become such a figure of culinary fun in recent years that it is hard to take it seriously as a dish - prawn marie rose sandwich may be one of the safer bets on an office sandwich platter, but the idea of serving the same combination to guests is still faintly embarrassing. Like gammon and pineapple, or scampi, the indignities suffered by this decent dish are too raw, too recent.

The thing is, like its contemporaries the black forest gateau, or the chicken kiev, the prawn cocktail is actually an inspired creation - one with, as Simon Hopkinson and Lindsey Bareham write in their book dedicated to such foods, The Prawn Cocktail Years, "the potential for being truly excellent". Sweet, nutty prawns bathed in a piquant sauce and served on a bed of crisp lettuce - you have to admit, the idea has a certain charm.

Although it almost certainly started life in the US, the dish does not, as is often claimed, seem to have been introduced to these shores by the redoubtable Fanny Cradock - it apparently merited a mention on Coronation Street at early as 1962. Five years later, it was popular enough for Fanny to describe "the ubiquitous prawn cocktail" as a "sordid little offering ... with a good old ground padding of lettuce cut with a knife and darkening at the edges, a tired prawn drooping disconsolately over the edge of the glass like a debutante at the end of her first ball and its opposite number - a piece of lemon tasting of the knife - clutching the opposite side of the rim like a seasick passenger against a taffrail during a rough Channel crossing". Sadly, they don't make them like Fanny any more.

This is a dish that stands and falls by its prawns - the soggy, barely thawed "little pink commas", as Bareham and Hopkinson put it, have no hope against the deluge of pink sauce. Delia Smith reckons that "the very best version of this is made with prawns (either fresh or frozen in their shells) that you have cooked yourself", and she dry-fries them before use.

Lamenting the disappearance of freshly boiled prawns at the British seaside, Bareham and Hopkinson recommend whole cooked prawns, shelled; Mary Berry suggests "cooked, peeled North Atlantic prawns, drained and dried" (though those in her photo look to be of a larger variety than the aforementioned commas); Gary Rhodes gives the reader the choice of the "small, pink, ready-cooked variety", which he describes as "moist and full of flavour", or large king prawns; Cradock uses shrimps or prawns; and Sophie Grigson prefers a mixture of cooked, unpeeled prawns.

Clearly, in an ideal world, I'd take a leaf from Delia's book and cook the prawns myself. The problem is, I'm convinced that smaller North Atlantic prawns have a sweeter flavour than the farmed east Asian giants - to say nothing of the very dubious ethical issues surrounding the latter, which put them straight on the blacklist - but it is remarkably hard to come by the cold water sort in their raw form. The next best thing is the ready-cooked but unshelled variety, which will, of course, require you to put in the legwork yourself, but the results are well worth it. I like Grigson's idea of using a mixture of prawns to vary the texture and flavour, so I'm adding some of Cradock's sweet, chewy little shrimps as well, but feel free to make up the weight with prawns if you can't find them.

I'd always associated the prawn cocktail with the dreaded iceberg lettuce, but as it wasn't introduced to this country until the early 1980s, I suspect Cradock's "crisp heart of lettuce" is more likely to have been a soft or gem. Bareham and Hopkinson and Grigson go for little gem; Rhodes and Heston Blumenthal for iceberg; Smith for cos; and Berry for a bag of mixed leaves.

Smith also adds rocket to her little gem, which I find too peppery; the greens should offer a refreshing contrast to the spicy sauce, as well as a welcome crunch, which points me in the direction of the little gem. Iceberg, though certainly crisp, is just too watery, and cos doesn't offer quite the same flavour, plus the larger leaves mean you're more likely to end up with a forkful of limp shreds. Grigson mixes in some white cabbage, presumably because of its robust texture - it works pretty well, but its vegetal flavour feels a bit rustic in a dish with pretensions to grandeur.

While we're talking crunch, Bareham and Hopkinson and Cradock all sneak in some cucumber, which certainly pulls its weight on the texture front. It should be finely diced and deseeded, but there's no need to peel it, as Bareham and Hopkinson insist - the skin provides a pleasing flash of colour. That's not the end of it - this being a fashionable 60s dish, avocado is a popular choice, and I love its rich creaminess against the sweetness of the prawns; they're a classic combination for a reason. Tossing it with a little lemon and seasoning, as Berry suggests, not only keeps it green, but ensures it doesn't get lost in the sauce.

Anything too strident, such as Bareham and Hopkinson's spring onion, or Grigson's fennel, threatens to overpower the other elements. To my surprise, I discover this is a dish whose success depends on a fairly fine balance of flavour.

The classic marie rose or cocktail sauce is a blend of mayonnaise, tomato and lemon juice. Berry suggests using a blend of light mayonnaise and creme fraiche, but I'm not keen on the light version, and I think the lemon juice adds enough freshness on its own. Cradock's whipped cream makes it taste too rich and cloying. In fact, it's tough to improve on a straightforward mayonnaise, preferably homemade so you can adjust the flavour to your own taste (I find most commercial varieties too vinegary, to say nothing of their weirdly jellified consistency).

The tomato element is generally supplied by ketchup. Rhodes insists on making his own, which, in contrast to the mayonnaise, hardly seems worth the effort, because once it is mixed with the other ingredients, it's fairly indistinguishable from the bought stuff. A little less sweet, perhaps, but if you want a stronger tomato flavour, you could always do as Berry suggests and add a squirt of tomato puree. Mind you, she also adds a pinch of sugar, which definitely isn't necessary.

Grigson and Smith use lime, rather than lemon juice. Either will do, but I'm sticking with lemon; it just works better with these classic flavours. Bareham and Hopkinson and Rhodes add a touch of old-fashioned luxury with cognac, and Cradock suggests the "merest flick" of sherry or madeira (which makes me think she means a cream sherry, rather than a bone-dry fino). I love the hint of boozy flavour, but I'm wary of adding too much sugar given the ketchup element, so I'm going to stick with brandy.

Many recipes also include a bit of spice: Tabasco sauce for Cradock, Smith, Bareham and Hopkinson; red chilli for Grigson; and creamed horseradish for Berry. Horseradish works surprisingly well with prawns, but you can't beat the vinegary kick of the classic Tabasco - or Smith and Blumenthal's Worcestershire sauce, which contributes a satisfyingly savoury note missing from the other ingredients. Grigson smashes her way through the classic, sticking in garlic, fresh coriander and apricot jam. The result mimics the same sweet and vinegary character as the original, but with a slightly eastern twist; it's nice, but it's not cocktail sauce.

Rhodes' prawn cocktail is a real 90s stunner - a tower of prawns and lettuce sandwiched between two discs of grilled red pepper, surrounded by squiggles of lemon and olive oil, and a rouille made from roasted red peppers and breadcrumbs. It is delicious, but the dominant flavour is of the red pepper - the poor old prawns don't stand a chance.

Grigson, ever the maverick, mixes her salad and prawns with pink grapefruit. The flavours work surprisingly well, but again, feel more eastern than seems strictly appropriate here. She garnishes with more coriander and red chilli, while Cradock uses the 60s equivalent, chives and paprika. Where spring onions dominate, the chives work with the other ingredients, providing just a hint of alliaceous flavour. The paprika adds a final flourish of colour - in fact, the two look rather pleasing together - but cayenne pepper gives the same visual effect with more of a kick.

Nothing can beat Cradock's lemon basket with a handle fashioned out of the peel, which "can be picked up easily and additional lemon juice squeezed over as desired without getting your fingers in a filthy mess". Carved fruit or not, prawn cocktail should be a feast for the eyes. Keeping the layers separate is important, though I find serving it in a glass, as is often suggested, makes it too fiddly to eat.

The fashion seems to be to provide your guests with an unpeeled prawn as a garnish, to remind them what they're eating - and it does look fancy, but you will need to supply either a finger bowl (retro heaven) or a decent napkin to head off any temptation for your guests to wipe their prawny fingers on your chairs or tablecloth. It may be a retro dish, but frankly, manners aren't what they were.

Put the mayonnaise in a bowl and whisk to loosen, then add the other ingredients and taste, adding a little more of any as takes your fancy.

Cook the prawns in a dry frying pan until pink all over, if you're lucky enough to have raw ones, then peel and de-vein all but four of them. Set the unshelled ones aside and mix the remainder, with the shrimps, into the sauce.

Cut the cucumber in half lengthways, scoop out the seeds, and cut the flesh into small dice. Peel the avocado, dice finely and toss this and the cucumber with the lemon juice and season well. Shred the lettuce fairly finely, and toss together. Divide between four bowls, plates or glasses with a dip in the middle for the prawns to sit in, and so the greens aren't entirely lost below.

Divide the prawns between the dishes and top with chives and cayenne pepper. Garnish with the remaining prawn and serve immediately.

Prawn cocktail - what did it ever do to you? Do you hanker after the classic version, or could it do with being dragged up to date with a few modern tweaks? And which of its contemporaries would you like to see revived?