How to Make the Perfect Saag Paneer 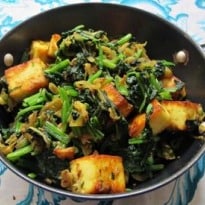 It's a classic vegetarian Indian restaurant dish that's quick and easy to make. But do you like yours wet or dry? And is frozen spinach ever acceptable?

Choosing from a menu is never straightforward where I'm concerned - I'm always worried I'm going to make the wrong choice, and miss out on something I'll never get the chance to try again. But as soon as I sink into the soft flock cushions favoured by British Indian restaurants of the old school, all such worries melt away - I know exactly what I'm going to have. Inevitably it's a spicy lamb curry from the chef's specials, with tarka dal and saag paneer, accompanied by a plain naan, ideally one the size of the napkin.

Now, I can make some pretty decent lamb curries, even if I sometimes have difficulty identifying one, and I'm a dab hand at dal, yet the simplest dish - fried spinach and fresh cheese - has proved a remarkably tough nut to crack. Nothing I've tried has come close to matching up to the garlicky, greasy greens served in the humblest of curry houses; nice, sure, but not the kind of dish you'd go back to like a woman obsessed. It seemed time for a more systematic approach - just how do they do it?

In India, this dish is known as palak paneer - saag is actually just a generic word for greens, but mustard leaves, purslane and fresh fenugreek being harder to come by in the UK, spinach, or palak, is generally used. Though I've long suspected, after consuming many hundreds of versions, that the secret of Indian restaurant saag paneers does not lie with fresh spinach - I even gave the slimy tinned stuff a try a couple of years ago - most recipes I find call for it.

Only the British Indian restaurant fan community are prepared to consider anything else, with one poster on an online message board recommending frozen blocks, conceding that "you can of course use fresh spinach, but this will naturally result in a wetter end result". This is certainly true, but the flavour of the fresh stuff is far superior, as Madhur Jaffrey notes in her recipe.

You do need mature spinach, of the kind that's so puzzlingly ignored by supermarkets, who favour the baby leaves that are far too delicate for this dish; I'm lucky enough to have a local market that sells it in big muddy bunches; greengrocers and farm shops are other good sources. If you can't find it, I'd suggest using the whole leaf frozen variety instead. (A certain frozen food specialist sells it in excellent value £1 bags.) Whichever you go for, keep the texture fairly chunky, rather than finely chopping it as Jaffrey suggests, as it contrasts well with the squidgy cheese.

More important than the type of spinach is what you do with it. More traditional Indian recipes simply add it fresh, simmering it down to a mush, but spinach being largely water, this leaves the dish too soggy for my taste. Dan Toombs, AKA the Curry Guy, who we encountered in our adventures in chicken tikka masala, wisely blanches the leaves first, then squeezes them dry before stirring them in at the end, which both keeps the dish dry, and means that you don't overcook the veg.

If you're using frozen spinach, take a tip from the excellently named Salvador Dhali on Curry Recipes forum, and allow it to defrost, drain and dry out before use - "it needs to be thoroughly squeezed of excess liquid (you'll be surprised at how much liquid comes out)," he writes. "It's key to the success of this dish." This surprise also applies to fresh spinach.

Paneer, a fresh white unsalted cheese, is relatively widely available these days (large supermarkets should have it), but it's also stupidly easy to make at home with nothing more than milk and lemon juice. I prefer the flavour and fluffier texture of homemade, but I can't get it as firm as the bought variety, which makes it more prone to falling apart in the pan. To be honest, it's largely there as a creamy foil to the spicy spinach, so I don't feel too guilty about buying it in, though I will be attempting to improve my cheesemaking technique in the future. Homemade or not, I don't think frying the cheese is as optional as Toombs suggests - given that, in his words, it makes the paneer "melt in your mouth crispy on the outside and nice and warm in the centre", why wouldn't you? Just because it's green, this dish doesn't need to be healthy.

Saag paneer is always powerfully alliaceous - garlic is a must, and Rick Stein's India, the India and Pakistan volume of Charmaine Solomon's excellent Complete Asian Cookbook, Dhali and Toombs all add onion too, the last deploying it in its red form. I'm not sure it's absolutely vital (how can it be, if Jaffrey doesn't use it?) but I do like the sweetness against the pungency of the garlic, and the same goes for the ginger almost everyone pops in too. Toombs' fresh tomato seems unnecessary though.

Jaffrey adds fresh green chilli to the dish, while Stein, Solomon, Toombs and Dhali go for chilli powder - I prefer the sharper flavour of the fresh sort. In fact, though Solomon and Toombs add cumin and coriander, and Toombs uses fenugreek too, it's possible to overdo it with the dry spices here. Jaffrey and Stein's subtly sweet garam masala, in restrained amounts, and the almost universally popular turmeric are quite enough for this simple side.

Though saag paneer is almost always served dry in British Indian restaurants, Jaffrey and Stein finish theirs with single cream and yoghurt respectively, with Stein suggesting a little double cream too "for a richer dish". While I love the combination of spinach and cream, here it robs the dish of those bold flavours I'm so used to, so I'm going to leave it out. I do like cooking the various elements in ghee, rather than vegetable oil though; it adds an authentic richness without blunting the flavour of the onion and garlic.

Jaffrey and Toombs start their dishes with pastes of garlic and chillies, and cook the various elements separately. This isn't necessary - Dhali is an advocate of the fast and hot method, explaining that "you're looking to get the spinach and the odd bit of onion and garlic to catch here and there (which is where a lot of this dish's great flavour comes from)", and I'm inclined to agree. As he says, it really doesn't get much simpler than this.

Bring a large pot of salted water to the boil. Drop in the washed spinach, blanch for 10 seconds, then drain and cool in iced water. Squeeze out well and finely chop the stalks and roughly chop the leaves. Squeeze again and again until no more water comes out - it should be as dry as possible. If using frozen spinach, skip this step, but do roughly chop it.

When you're ready to cook, lay out all the ingredients within easy reach of the hob. Heat the ghee in a large heavy based frying pan on a medium-high heat and fry the paneer cubes, in batches if necessary, until golden and crusted. Set aside on kitchen paper with a slotted spoon, sprinkling lightly with salt, leaving as much ghee in the pan as possible. Heat until it starts to smoke slightly.

Add the onion, garlic, ginger and chilli to the pan along with the spices and salt and fry, stirring vigorously, until well coloured, but not burnt.

Add the chopped, dry spinach and paneer and stir vigorously until hot - it should catch a little, but watch it doesn't burn. Taste for seasoning and serve.

Saag paneer: do you prefer it wet, Indian-style, or the drier British equivalent? What else can you do with homemade paneer, and which other Indian restaurant favourites would you like to crack?