How to Protect Your Child From Obesity 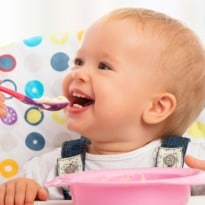 The first few years in a child's life play a huge role in determining how healthy, unhealthy or obese he/she will be in the future. This makes it crucial that infants be fed with the right kind of food. According to a study published in the journal Pediatrics, infants should be given a healthy and nutritious diet from their first year itself. (Kids' obesity risk starts before school age)

Xiaozhong Wen and his team at the University of Buffalo conducted their study by analysing sub-samples from more than 1,500 infants. These were taken from the Infant Feeding Practices Study II that was conducted between 2005 - 2007.

Researchers found that babies that are fed a diet high in sugar, fat, protein and dairy products show faster gain in body mass index scores from ages six to 12 months. This kind of a diet also impacts their physical growth.

According to Xiaozhong Wen, lead author and assistant professor at University at Buffalo in the US, "Dietary patterns are harder to change later if you ignore the first year, a critical period for the development of taste preferences and the establishment of eating habits."

Infants are highly receptive of the food that is given to them, and on repeated consumption of a particular food item, they quickly get accustomed to its taste. (How to Get Your Little Ones to Eat Nutritious Food)

Xiaozhong Wen added, "There is substantial research to suggest that if you consistently offer foods with a particular taste to infants, they will show a preference for these foods later in life. So if you tend to offer healthy foods, even those with a somewhat bitter taste, such as pureed vegetables, they will develop a strong liking for them."

CommentsExperts concluded that a healthy diet ensures an overall development of a baby. It also helps in striking out probable health risks - like obesity - that are associated with an adults life.