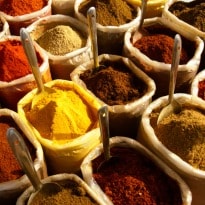 About 12 percent of spices brought to the United States are contaminated with those from Mexico and India found to be most contaminated, according to an analysis of spice imports by federal food authorities.

The contaminants include insect parts, whole insects, rodent hairs and other things, according to the US Food and Drug Administration (FDA) analysis cited by the New York Times. Nearly one-quarter of the spices, oils and food colourings used in the US comes from India, according to the FDA.

FDA commissioner Margaret A. Hamburg had intended to visit India in autumn and meet with spice industry officials to discuss the agency's concerns about spice safety, but the government shutdown delayed her plans, she was quoted as saying.

Indian spice officials are offering incentives to get farmers to change some traditional harvest and handling practices that could lead to contamination, the US daily said.

Part of a comprehensive look at the safety of spice imports, FDA analysis also found that nearly 7 percent of spice imports examined by federal inspectors were contaminated with salmonella, a toxic bacteria that can cause severe illness in humans.

The shares of imported spices contaminated with insect parts and salmonella were twice those found in other types of imported food, the Times said citing federal food officials.

Promoted
Listen to the latest songs, only on JioSaavn.com
According to the Times FDA called spice contamination "a systemic challenge" as most of the insects found in spices were the kinds that thrive in warehouses and other storage facilities.

This suggested that the industry's problems result not from poor harvesting practices but poor storage and processing, it said.

CommentsUnder new US laws FDA has the power to refuse entry of foods that the agency even suspects might be contaminated - strong leverage to demand changes in harvesting, handling and manufacturing practices in foreign countries, the Times said.