In Defense of Truffle Oil 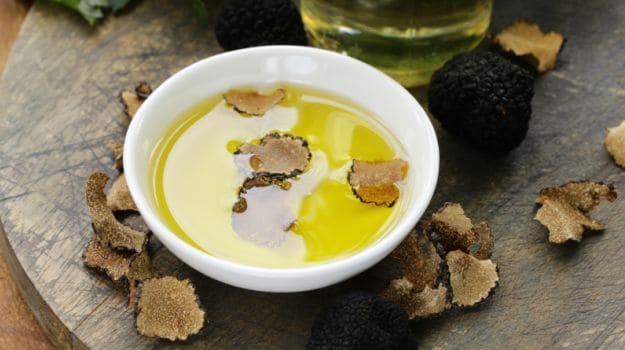 Midwinter is high season for fresh truffles in Oregon's Willamette Valley. With the help of an experienced truffle hunter (or a trained dog), I could spend an afternoon pursuing these wild fungi in woodlands near Eugene. I'd describe for you my gentle raking in the damp duff to unearth one, then two, and with luck, a handful of dimpled and pebble-sized white truffles.

The truth is I don't have access to the native truffles of my home state any more than someone living off the Merritt Parkway in Connecticut. Even the most common species, the Oregon white truffle, Tuber oregonense, is hard to find, expensive to buy and trouble to keep. So I experience one of the world's most coveted and expensive wild foods through the next best thing: truffle oil.

Truffle oil is so controversial I should be reluctant to admit I'm a user. All truffle oil is fake, say those dedicated to authenticity. Some proclaim that it's an abomination and that anyone who actually likes truffle oil should be cast into the land of margarine, garlic granules and potato buds.

Are they right? The answer is largely yes, but also no. And, it is the slim "no" that makes truffle oil so intriguing.

Nearly all commercial truffle oil is engineered by injecting olive oil with a synthetic chemical. In the case of white truffle oil, the gas 2,4-dithiapentane is responsible for the beguiling fragrance. The synthetic form of 2,4-dithiapentane is no more fraudulent than the Vitamin C in your morning multivitamin, and I imagine the Europeans who developed this affordable and ingenious method are befuddled over the Americans' snubbing. Still, manufactured truffle oil smacks of artificiality as much as imitation vanilla.

The real trouble is that 2,4-dithiapentane is merely the most potent of numerous compounds that make the Italian white truffle so desirable. This is why it is always recommended to use truffle oil with great restraint, or not at all. More than a few drops of truffle oil over risotto, and it bowls you over with its unblinking, single-note come-on. Intoxicating, yes, but to the point of near-suffocation, like being in the embrace of a heavily cologned man.white truffles

I'd never understood why imported white truffle oil turned me off so until a year ago when I sampled the real thing: a natural infusion of Oregon white truffles created by Jack Czarnecki. A restaurateur, truffle authority and passionate forager, Czarnecki is the only commercial producer of all-natural truffle oil in the United States, perhaps the world.

To appreciate what naturally made truffle oil is, and is not, Czarnecki said, it is important to understand why a truffle smells so alluring.

The call of the truffle

The truffle's scent is purely a matter of survival. In the Northwest, the wild truffle cohabitates with the Douglas fir tree, fusing itself to the thick roots. In exchange for the tree's photosynthesized food, it barters water-bearing nutrients sipped from the soil through its filaments. Once the truffle matures in about six months, it continually emits an odorant to attract the squirrels, voles and other woodland creatures that will dig it up, eat it and distribute its spores to new growing sites.

Although sold by weight, truffles are valued by the strength of their bouquet, as the fruiting body of most species is flavorless (black truffles are exceptional in this regard). The only way you actually "taste" a truffle is through your nose while eating, or later, after a burp. An unripe truffle is worthless and a bruising disappointment to any expectant buyer. It is the selling of scentless, unripe truffles -- not the esteemable character of Oregon truffles themselves -- that has devalued local truffle harvests.
Buying a truffle is like paying for air in a jar: Ephemeral gases are generated, like breathing, only as long as the truffle is actively ripening. Once you possess a ripe truffle, the challenge is to capture (or swallow) that aphrodisiacal life force before it vanishes. One of the few ways to preserve it is in a fat, such as olive oil.

To make his bottled Oregon Truffle Oil, Czarnecki traipses out in the farmlands near his home in Dundee, during the perpetually wet and 40-degree Willamette Valley winter. He scouts for animal activity in known truffle spots and bets on a score. What he brings back, he sorts for additional ripening and selects eligible specimens for exposure to mild-flavored oil.

All Czarnecki will reveal about his method is that it is a natural and sterile infusion that safeguards the oil from bacterial growth (his background is in bacteriology).

"It is tricky to make truffle oil," he said. "The more mature the truffle, the more quickly it produces its gases, and I have to work quickly."

Czarnecki infuses the oil in single-liter batches, then curates each, aging it for up to six months until the flavors bloom to their full, tantalizing effect.

While anyone with access to fresh truffles can make their own truffle oil by submerging pieces of it in warm oil, this method does not produce a shelf-stable or safe product for sale due to the risk of botulism. At most, it will last for two weeks in the refrigerator. Oregon Truffle Oil keeps refrigerated for up to one year as, over time, the volatile gases escape from the oil, like the bubbles in an opened bottle of Prosecco.

The beauty of truffle oil is that it makes excellent use of those truffles too blemished or otherwise unfit for commercial sale. As truffle cultivator Charles Lefevre said, "Fresh truffles that are shaved at the table must always be beautiful." But any ripening truffle is fit for oil, and it can even be reused afterward -- so long as it's still fragrant.

Truffle oil that originates in a lab is consistent bottle after bottle. Not so with naturally infused truffle oil. Unlike single-gas synthetic truffle oil, Czarnecki's Oregon White Truffle oil contains all of the 30-odd volatile sulfuric compounds of Tuber Oregonense, yielding a more nuanced truffle oil experience. "Nature is quirky," Czarnecki said, and his bottled brand conveys the natural variation and complexity, even the mystery, of fresh white truffles.

So, how do you tell if the truffle oil you have is bonafide? The label will simply list olive oil and truffle, not "truffle essence" or "natural flavors." Also, you won't see any floating bits of desiccated truffle, which is a ruse. Another tell-tale sign is an orchestra of mushroom, malt, baked potato, grass, Parmesan, hard-boiled egg and mineral playing on air. If the truffle oil blows you away with a singular smell, it's likely synthetic.

To date, Oregon Truffle Oil is the only verified 100 percent natural truffle oil on the market. But Lefevre is one truffle advocate who aims to find out if there are any others. He's collecting samples of imported truffle oil to test using a mechanical "nose," a gas chromatograph to analyze each oil's composition. A single spike will finger any synthetic oil while multiple aroma spikes will signal the real deal.

How to enjoy truffle oil

A cooking oil that should never be used for any actual cooking, truffle oil degrades rapidly, especially in the presence of heat. It's best to hold the bottle in one hand and your fork in the other before you apply droplets to scrambled eggs, gnocchi or mac and cheese. It has more stamina in cooler applications, such as on popcorn and in vinaigrette.

It's a convenient mnemonic that white truffle oil best enhances cream-colored foods, including potatoes, chicken, celery root, halibut, onions and cream. I use it habitually with cauliflower, steamed and pureed with butter for a side dish or blended into simple soup -- garnished with Dungeness crabmeat for company. Because of its delicacy, I've found that you can use more of this truffle oil than the standard import, and it's too subtle for truffle fries.

Promoted
Listen to the latest songs, only on JioSaavn.com
One of the best ways to experience true truffle oil is to make truffle butter. Into one stick of softened salted butter, blend in two teaspoons, or three for a more pronounced flavor. Wrapped tightly, you can store it in the refrigerator for up to two weeks. Eat it on artisan bread, mashed potatoes or corn on the cob.

No truffle oil is a substitute for even a single fresh truffle. But until I experience my own exotic truffle hunt, I'll hold onto my bottle of real truffle oil, a miracle of food preservation and an affordable luxury I treasure. At $6 an ounce, it's a steal.