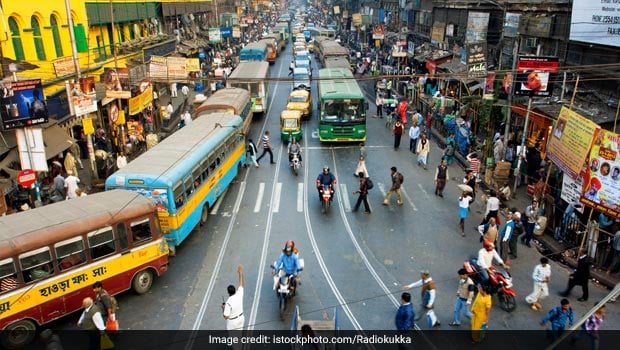 I recently went on a food trail at Kolkata's College Street when I tried to relive memories of my college days spent there.

You would be hard pressed to find any other urban district in India that has such a concentrated collection of business establishments, primarily printing houses and restaurants, that set up shop over a hundred year ago. I dropped into a few of them that afternoon. I saw that they were all packed with folks refueling themselves with some soulful fare in the middle of the day. The restaurants seemed to look just the way they would have when they were first established. The menus were largely the same too. It was as if I was in a museum of living food history.

I let my mind wander that afternoon. I wondered about the stories that the tables at these restaurants held, the secrets that their walls guarded. And in the backdrop of our Independence Day, I pondered over all the the changes that they had witnessed from the time of the British Raj to India's Independence in 1947, and the years after that.

Interestingly, such establishments are not limited just to College Street. Kolkata has an interesting mix of heritage restaurants and eateries which are spread across the city and which are still going strong. Even though, I live in Mumbai now but try to visit these places during my trips back to Kolkata. Let me tell you about some of my favourite eateries in Kolkata which belong to the pre-independence era and which are still going strong. I have arranged them in context of their proximity to the city's metro network to help you plan your trips to them better.

This sweet shop, started by a father-in-law and son-in-law duo way back in 1844, is a rather unique one. You will not get roshogollas or mishti dois or chom choms, pantuas, lyangchas and dorbeshes, popularly sold across all mishtir dokans (sweet shops) of Bengal here. They specialise in just one item and they do it very well, and in many varieties. This is the shondesh. A sweet made with steamed or baked chhana (cottage cheese). I am yet to go there myself but a friend of mine who loves Nakur, as the shop is colloquially referred to, makes sure that I get a box of their best when I am in town.

Girish Ch Dey and Nakur Ch Nandy- This sweet shop, started by a father-in-law and son-in-law duo way back in 1844

This small, garage sized eatery is the original branch of the chain of the same name. This outlet was established in 1910, 37 years before India got its Independence. The founder's family still runs the business. The dish to try here is the kobiraji cutlet, chicken or fish as per your preference. The kobiraji is a cutlet which is fried in an egg batter that then takes a crunchy, lacy form that covers the surface. If done wrong, the batter could get too oily and overpower the flavours and textures of the stuffing inside. No such problem at Mitra Cafe though, where the 'balance of power' in the kobiraji is just right.

This is a tiny eatery that traces its origins to 130 years back when a Scottish gentleman named Allen opened a snack shop in Chitpur in Kolkata. He then moved base to Sova Bazar where the eatery is still operated by the Bengali descendants of the original staff running it. Allen loyalists swear by the prawn cutlet here and rightfully so. The cutlet is fried in ghee and the maida (refined flour) batter is packed with flavours and is well seasoned. The generous prawn snuggled inside the batter is amazingly juicy.

This 160-year-old sweet shop has remained a favourite of folks across generations at College Street. Go there for a kochuri breakfast, or in the evening for freshly made puffed up Radha Bollobi (refined flour/ maida puris with a mashed lentil filling) served with chholar dal. The shingara (samosa) there is one of the nicest in town. Don't miss out on the uniquely white coloured shaada mishti doi that Putiram is famous for.

The cabins of Kolkata had come into their own more than a century back but very few of them exist today. Locals would get together here for endless hours of adda (chats) accompanied by an unending supply of cups of tea and snacks. The snacks were inspired by the club food of the 'shahebs' of the time and include chops, cutlets, toast butter and omelettes apart from the Moghlai paratha and luchi ghoogni. Noodles and chilli chicken have entered the menu today. This 116-year-old establishment, has done a splendid job of preserving the legendary 'cabin' culture of Kolkata.  An interesting dish to try at Dilkhusa is the deemer devil, the Bengali cousin of the Nargisi Kebab and of the Scotch Eggs of the UK. They are quite generous with their serving of minced meat in the deemer devil here with the boiled egg (deem) taking backstage. Another equally legendary cabin close by is the Basanta Cabin.

Dilkhusa Cabin- This 116-year-old establishment, has done a splendid job of preserving the legendary 'cabin' culture of Kolkata​

This sherbet shop celebrated its hundredth birthday earlier this year. Urban legend has it that freedom fighters used to once come here to meet, hidden away from the gaze of the police. The establishment is still run by the founder's family and runs packed even today. The drinks served are made with a variety of seasonal fruit concentrates made in-house. The daab sherbet (tender coconut) is a perennial favourite and is just the dose of refreshment one needs after walking down the busy lanes here.

This was established in 1927 by a family that came to Kolkata from Odisha. The restaurant belongs to a hotel type referred to locally as 'pice hotels'. Traditional Bengali dishes are served at such places at economic prices. They cater to those who work at the offices nearby. The menu changes according to what is in season and is available in local markets. The food is served on banana leaves and the water in bhaars (earthen cups) at Swadhin Bharat. Do look out for the chorchori (mixed vegetables cooked with fish head) and the maacher jhol (light fish curry) of the day.

While the exact date on which the late Mr Anadi had founded this eatery is not recorded, it is said to be close to a year or two short of a century now. They start the day at lunch time and are best known for their Moghlai paratha, a dish that is similar in concept to the baida roti of Mumbai, the anda roti of Kundapur (near Mangalore) and the Martabak of Malaysia. The dark horse here though is the kosha mangsho, a slow cooked onion based goat meat dish, made famous by the cabin restaurants of north and central Kolkata. This is best paired with lachha paratha.

Anadi Cabin-  The dark horse here though is the kosha mangsho, a slow cooked onion based goat meat dish

This restaurant, located beside the Elite Cinema Hall, was founded in 1928. They have perfected the art of the Awadh origined Kolkata biryani in their ninety years of operation. Do ask for an extra alu (potato) with your biryani. The potato was introduced to the Lucknowi pulao/ biryani in Kolkata and is considered to be the heart of the biryani by most here. The alu in Aminia soaks in the spices added to the biryani as well as the juices of the meat. At Aminia, you will still find remnants of the actual 'cabins'. Curtained cubicles which were once set up to encouraged for women to come out for family meals at a time when the purdah system was still prevalent in parts of Kolkata.

Aminia Restaurant-  At Aminia, you will still find remnants of the actual 'cabins'​

This restaurant, located beside the Elite Cinema Hall, was founded in 1928

This is my favourite place for the Kolkata biryani. What I like is the finesse and subtlety that is displayed in the flavouring of the rice. They have been in business since 1941 and their continued popularity shows that they have never let the tempo in the kitchen slow down. You do get the quintessential meat heavy 'Mughlai' breakfast here. Regulars stake their place by 6 am to ensure that they don't miss their fill of dal gosht through the year and nihari in winter.

There are many more legendary places from the pre-independence era which are hidden in the nooks and corners of Kolkata. The best way to pay them a tribute in my books is to add them to your list of favourites and then go and have a meal there this Independence Day.