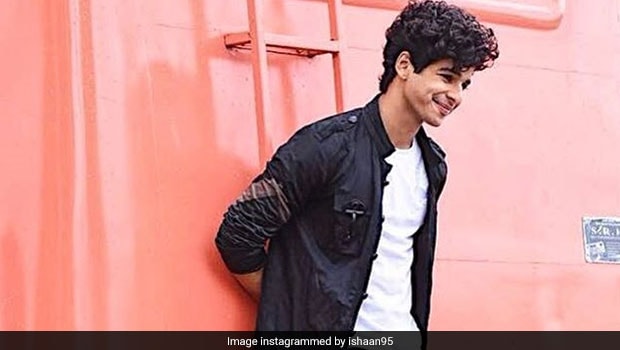 Bollywood actor Ishaan Khatter is riding high on the success of his Bollywood debut 'Dhadak'. The good-looking actor recently made headlines for his ramp-appearances during the recently-concluded Lakme Fashion Week, where he was snapped with his Dhadak co-star, Janhvi Kapoor. Ishaan Khatter is quite active on his Instagram page as well, and his fans just can't get enough of his goofy acts and infectious energy, which is quite evident from his timeline. Although, the 'Beyond The Clouds' actor is super fit; it seems that he loves indulging himself in food too. While Ishaan and Janhvi were promoting Dhadak, the actors had posted videos and pictures of themselves eating waffles, pani puri and other goodies, making us believe that the young actors aren't very different from us at all! However, today the actor put on the chef's hat and prepared himself a really delicious-looking breakfast meal.

Ishaan Khatter posted a snapshot of his Monday morning breakfast on his Instagram stories and the meal will brighten your day! Seen in the picture is what looks like French toast, topped with pomegranates and blueberries, along with some more fruit in the form of kiwi with a cup of hot coffee. Ishaan seems to have topped the French toast and coffee with generous sprinkling of cinnamon powder.

Doesn't everything look oh-so appetising? Now, we know that apart from his amazing acting chops, Ishaan has a talent to be a chef as well! French toast is a popular breakfast dish made by soaking bread slices in eggs and milk and then toasted in grease of your choice. French toast is usually served with maple syrup or honey and fruits. But, Ishaan doesn't seem to have used any sweetener for his Monday morning breakfast, and has instead, topped the dish with berries and pomegranate seeds to add natural sweetness to it. All three fruits used in the meal are rich in antioxidants, which is important for fighting inflammation and keeping the skin and heart healthy.

All in all, we know that Ishaan Khatter's Monday morning breakfast is better than most of ours. And, here we are, struggling to motivate ourselves to get out of our beds on Mondays! It seems like we can learn a thing or two from Ishaan Khatter, when it comes to brightening our weekday mornings.