A Spice that Cures: 5 Great Benefits of Cinnamon 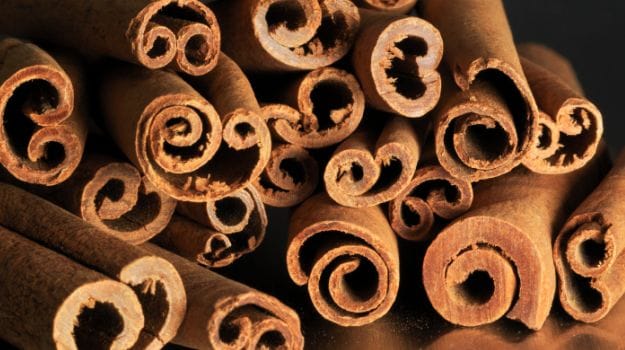 The woody scent of cinnamon reminds me of my grandma’s kitchen. It brings back memories of a pantry full of puddings and baked goodies where I discovered the meaning of satisfaction. It makes me think of frosty winter days and cozying up with cinnamon dusted butter cookies and hot chocolate.

The warm-sweet taste of these fragrant quills has been delighting our senses for centuries. It was one of the first spices to be used in the ancient world. It was brought into Egypt as early as 2000BC. Limited supplies of cinnamon travelled across Europe as a luxury good. Medieval cooks relied on cinnamon to preserve meat during winter months. By the 13th century, when it became a bit more accessible, it was used in ointments and perfumes. Arab traders maintained their monopoly on the cinnamon trade until the 16th century when Portuguese traders discovered cinnamon at Ceylon (present day Sri Lanka).

Today, there are primarily two varieties of cinnamon available – Cassia cinnamon from China, Vietnam and Indonesia and Ceylon cinnamon from Sri Lanka, India, Brazil and the Caribbean. The cheaper variety, Cassia cinnamon has a stronger flavour while Ceylon cinnamon is mellow and sweet. The inner bark from the upper branches of the tree is scraped and dried. This naturally curls up into sticks called quills. Ground cinnamon is sourced from the older bark found on the lower parts of the tree. While sticks can be stored for longer, cinnamon powder has a more robust flavour. Sniff some cinnamon to ensure it has a sweet smell, a characteristic that reflects freshness.

While I’ve always been a fan of its flavour and aroma, I was thrilled to know about cinnamon cures. This humble spice can settle your stomach, boost metabolism and is a memory keeper. Backed by Ayurveda and traditional Chinese medicine, cinnamon can be used for many things and not just to perfume the air.

1. Cough and cold: Soothe that scratchy throat by sipping on some cinnamon infused water. “Soak a cinnamon stick in warm water and drink it with a drop of honey about two-three times a day,” suggests Dr. Ashutosh Gautam, Clinical Operations and Coordination Manager at Baidyanath. You can also boil cinnamon sticks and inhale the vapour to relieve congestion. According to Ayurveda, cinnamon calms the vata and kapha doshas.

2. Acne and dry skin: Cinnamon can be used as a homemade acne treatment. Mix some cinnamon powder with rose water and apply, recommends Dr. Gautam. Leave on for 10 minutes, wash off and pat dry.  The anti-microbial properties prevent the growth of acne causing bacteria. I tightens your pores and makes your skin smooth. Antioxidant-rich cinnamon can also be used to make a scrub for rough skin along with honey to restore shine and softness.

3. Hair and beauty: Cinnamon is known to improve blood circulation of the scalp, strengthen hair roots and promote hair growth. Use two teaspoons of cinnamon powder in a hair mask with one tablespoon of warm olive oil and one tablespoon of honey. You can even add an egg for conditioning. Apply on wet hair, leave it on for 10-15 minutes and rinse. The anti-bacterial properties of cinnamon also help in preventing tooth decay and gum disease. This is probably why cinnamon oil is often used in chewing gums, mouthwashes, toothpastes and breath mints.

4. For diabetics: A study published in the December 2003 issue of Diabetes Care, showed that consuming as little as 1 gram of cinnamon per day reduced blood sugar, triglycerides, LDL cholesterol, and total cholesterol in those suffering with type 2 diabetes. “Mix a pinch of cinnamon in water, bring it to a boil and consume this drink about half an hour before your meal. Cinnamon can improve your glucose metabolism and boosts satiety. It controls the sudden spike in blood sugar that we experience after a meal,” says Dr. Shikha Sharma, Wellness and Nutrition Expert at Nutrihealth.

4. Digestive aid: Cinnamon improves digestion and absorption. It is an anti-bacterial and heals infections in the GI track. If you’re suffering from an upset stomach or cramps, cinnamon tea can bring much relief. For diarrhea, 1/2teaspoon of cinnamon mixed with yogurt will make you feel better.

5. Natural anaesthetic: Cinnamon can act as a pain reliever in certain cases. For a sinus headache, you can combine ½ teaspoon of cinnamon with water to make a paste and apply it on your forehead. Studies indicate that using a combination of cinnamon powder and honey or ginger can help treat arthritis pain. "It is a good source of manganese which helps in building of bones and other connective tissues. Hence it is helpful in arthritis and osteoporosis," says Dr. Gargi Sharma, Wellness Expert at Aayna Clinic in New Delhi. A mix of cinnamon powder and ginger when applied as a paste can reduce post-workout muscle soreness.

The joy of cooking with cinnamon

You probably have some cinnamon powder or sticks hiding in your kitchen cupboard. Let it show up in your meals. Few aromas are as comforting as that of cinnamon. A pinch of cinnamon can make your desserts shine. Bake with it, not just rolls but even breads, muffins, tea cakes and anything your heart fancies. It lends a certain depth to meat. Long, slow cooking pulls together all the rich flavours. Spice up your curries with cinnamon, it makes them earthy and pleasant. I enjoy stirring my tea with a cinnamon stick or sometimes adding a pinch to smoothies. Sprinkle some over yogurt, fresh fruits and on your breakfast cereal.

What’s your favourite recipe with cinnamon? If you need inspiration, start here.

Bake yourself happy with these cinnamon rolls whenever the mood strikes. Made from scratch, they are the perfect companions for a warm cup of tea.

Promoted
Listen to the latest songs, only on JioSaavn.com
This easy weeknight meal brings two favourite flavours together - sweet caramelized onions and the scent of cinnamon.

CommentsWarm up a bit with these spiced lamb cutlets that use turmeric, garlic, ginger, cloves and cinnamon. Serve these when you have a crowd to feed.

2 Fruits And 3 Vegetables A Day Might Be The Secret To Longer Life: Study
This Kaju Curry From Lucknow Is Just What You Need To Amp Up Your Meal - Recipe Inside