Jacqueline Fernandez's Mother Brought In A Sweet Easter Surprise For Her!

Jacqueline Fernandez was surprised on the shoot location of Race 3 by mother, who brought along hot cross buns for her, to celebrate Easter 2018. 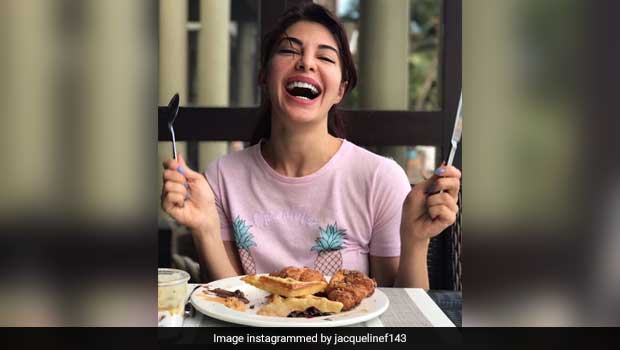 Highlights
After teasing fans with some amazing-looking posters from the much-awaited release Race 3, the cast has begun shooting for the first schedule in Abu Dhabi. Our very own bubbly Sri Lankan import to Bollywood, Jacqueline Fernandez, who also plays a key role in the movie, has been posting pictures and videos from on-set on her Instagram page. Just the other day, Jacqueline shared a hilarious video of the cast and crew of Race 3 having a blast on the movie's sets.

Jackie was also surprised by her mother, who decided to drop by at the location of the shoot and even brought her some delicious Easter treats. Have a look!

We don't know where those buns came from, but don't they look absolutely delicious? Hot cross buns are traditionally eaten on Good Friday in several Christian-majority countries like the UK, Ireland, Canada, New Zealand, South Africa and some parts of the USA. In case you were wondering, the cross on top of the buns represents the holy cross of Jesus Christ, who was crucified on the day that is commemorated as Good Friday.

Since Good Friday precedes Easter - the day when Jesus was resurrected - the buns are also served during the festivities sometimes. With Good Friday and Easter just around the corner, Jackie's mother surprised her with a basket full of the buns! Isn't that incredibly sweet? The buns are made from sweet and spiced dough that also often has raisins and currants. These cakes are eaten after Christians break their month-long fast during Lent and also during Christmas and New Year's.