At Jagannath Temple, 700 Cooks for Mahaprasad 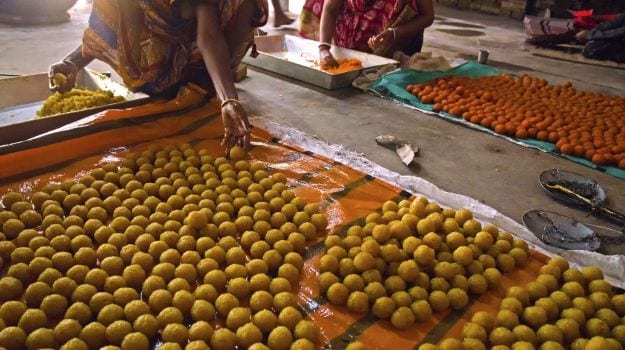 Prepared by 600-700 cooks and relished by about 50,000 pilgrims, the lavish 'Mahaprasad' served at the Jagannath Temple has retained its appeal amongst devotees for ages.

The Mahaprasad cooked on the premises of the temple at Ananda Bazar (abode of peace), deemed to be the biggest open-air eatery in the world, is consumed by thousands of devotees, who purchase and eat together irrespective of their caste, creed or status.

"On an average, we cook Mahaparasad for 20,000 people and on special occasions, we prepare food for nearly 50,000 people," says Damodar Mahasuar, the president of the suar nijog (temple cooks). Mahaprasad is only cooked in earthen pots on wood fires.

"We use 40 to 50 quintals rice and 20 quintal dal (pulses) daily, besides other vegetables to cook the Mahaprasad, which is sold at a cheaper rate so that it's available to everyone," Damodar said.

An official of the temple administration revealed an order can be placed for a 'Baihandi' costing Rs.2,000 which can be served at a community feast on auspicious occasions. "The steam-cooked food is offered to Lord Jagannath first and then to Goddess Bimala after which it becomes Mahaprasad. Mahaprasad is treated here as 'Anna Bramha' (symbolising our existence)," on the website of Shree Jagannath Temple Administration (SJTA).

Mahaprasad is of two types - 'Sankudi' and 'Sukhila' (dried). 'Sankudi' Mahaprasad includes items like rice, ghee rice, mixed rice, cumin seed and asaphoetida-ginger rice mixed with salt and dishes like sweet dal, plain dal mixed with vegetables, mixed curries of different types, 'Saaga Bhaja'(spinach fry), porridge and the like. All these are offered to the Lord in ritualistic ways. While thousands of devotees relish the Odia delicacies at the Ananda Bazar, people also take Mahaprasad to their homes to offer it to their guests during social functions such as thread ceremonies and weddings.

"There is no role of SJTA in selling Mahaprasad to the devotees. It is being sold by the temple servitors," says SJTA chief Suresh Mohapatra. The SJTA now plans to deliver Mahaprasad to the doorsteps of people through online orders.

Promoted
Listen to the latest songs, only on JioSaavn.com
(A sweet, sweet temple: Where God and devotees get chocolates)

"We are planning to serve Mahaprasad to the devotees through online booking. However, we will take the decision after the approval of various nijogs (servitor groups) and the temple managing committee," confirmed a senior SJTA official.