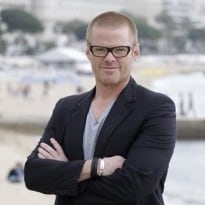 Anyone with a hankering for hash of snails or powdered duck or a host of other centuries-old British cookery should be plenty pleased with this year's James Beard Foundation cookbook of the year.

But for the rest of us -- by which I mean, virtually every last one of us -- the selection of Heston Blumenthal's "Historic Heston," a $200, 431-page epic exploration of mostly antiquated recipes, will be a head-scratcher. It's one of those books so fabulously out of touch with any cook who doesn't have an army of sous chefs at his side, one has to ask for whom this book was written.

Actually, the answer is obvious. It was written by and for Blumenthal, a talented writer and brilliant chef with a host of restaurants in England. And in that regard, it is a masterpiece. Blumenthal has a knack for ferreting out the genealogy of a dish, a skill he's put to fascinating use in previous books, including his 2006 "In Search of Perfection."

But the selection of his latest tome as cookbook of the year -- announced Friday evening during a ceremony in New York -- is puzzling. Blumenthal takes recipes already made obtuse by history (salmagundy, anyone?), and instead of translating them into terms contemporary readers could appreciate or at least learn from, he filters them through an equally inaccessible lens of modernist (think whiz-bang science-driven cooking) techniques.

What's more, the book got two awards, also beating out David Kinch's "Manresa: An Edible Reflection" and Rene Redzepi's "Rene Redzepi: A Work in Progress" in the cooking from a professional point of view category.

Of greater interest to most home cooks will be the foundation's naming of Diana Kennedy to its Cookbook Hall of Fame. Kennedy has spent much of her life learning and preserving the traditional cooking and ingredients of Mexico, a mission that sends her across the country in search of elusive recipes.

Her first cookbook, "The Cuisines of Mexico," was written based on research with home cooks across Mexico and established her as the foremost authority on the cuisine. It remains the seminal work on the subject.

The Beard Foundation's awards honor those who follow in the footsteps of Beard, considered the dean of American cooking when he died in 1985. Friday's ceremony named winners in media and publishing; a separate ceremony on Monday will be held for chefs and restaurants.

Promoted
Listen to the latest songs, only on JioSaavn.com
Some familiar faces nabbed broadcast awards Friday. Martha Stewart was honored for her public television series "Martha Stewart's Cooking School" in the studio-based television category, while Anthony Bourdain took the top honor for on-location television for "The Mind of a Chef," also on public television. Outstanding food personality or host went to Food Network's Ina Garten for her "Barefoot Contessa: Back to Basics."

The big winner in the journalism awards was David Chang's Lucky Peach, a quarterly launched in 2011 that quickly became one of the top food magazines. Though the magazine itself wasn't honored Friday, its writers netted awards in five different categories -- humor, food and culture writing, personal essay, profile and the MFK Fisher Distinguished Writing Award.