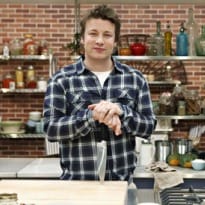 Campaigning chef Jamie Oliver has demanded a crackdown on the "crazy" policy of fast food premises opening near schools, as part of a renewed drive to tackle childhood obesity.

Outlets being licensed to start selling unhealthy products near schools was completely at odds with the government's investment in food education and school lunches, Oliver said.

"I do find it completely crazy that we do all this hard work in one part of government while at the same time you've got other parts of government locally and nationally which are still allowing any old junk food operator to open up within spitting distance of a school," said Oliver. "That, to me, is madness."

He also urged ministers to draw up a tough new blueprint to reverse the trend of rising obesity and to appoint a figurehead to drive through changes.

"Positive social change is not that far away and I think it's not that hard but what needs to be done is for about 50 or 60 separate decisions and initiatives to happen at once, all followed by a five-year strategy. The one thing that will make a change is lots of changes."

In an appeal for "leadership and vision" from all political parties on what he called "the shocking rise in diet-related diseases and obesity", Oliver added: "Let's see if we have one pioneer, one visionary who's going to put prevention [of childhood obesity] at the heart of its campaign".

Oliver's Channel 4 series Jamie's School Dinners in 2005, which exposed how much unhealthy food pupils were served at school at lunchtimes, prompted the Labour government to introduce more nutritious school meals in England.

Photo: Jamie's School Dinners in 2005 exposed how much unhealthy food pupils were served at school at lunchtimes. Photograph: Joerg Carstensen/DPA/Corbis