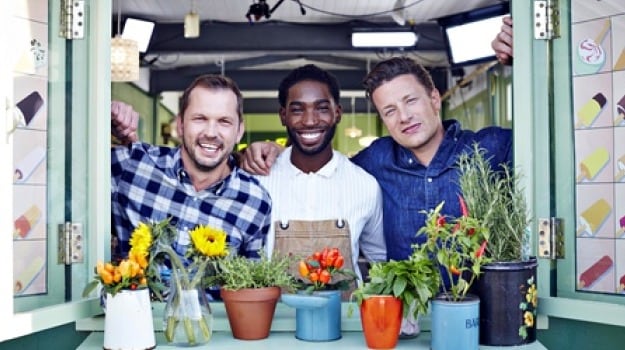 Jamie Oliver, who has led the campaign for improved school meals, is turning his attention to a campaign encouraging shoppers to buy "crooked" carrots, knobbly pears and wonky potatoes, in an effort to reduce food waste.

Misshapen but perfectly edible fruit and vegetables that would otherwise go to waste will be sold by Asda at discounted prices in a national trial starting at the end of January.

The retailer - the UK's second largest supermarket - said long-standing consumer resistance was about price and quality, but its research showed that 65% of its customers were now open to the idea of buying oddly shaped fresh produce, while 75% would definitely buy "wonky" if it was cheaper.

The initiative was triggered by an investigation into the scale of the UK's food waste carried out by the celebrity chef and farmer Jimmy Doherty. It features in the TV programme Friday Night Feast, which starts on Friday night on Channel 4.

In the first programme, the pair meet farmers who tell them that they were unable to sell thousands of tonnes of their fresh vegetables to supermarkets because they were deemed imperfect. They approached Asda to suggest a small trial in store - filmed for the programme - to gauge customer perceptions of wonky produce and whether they would be willing to buy it at a discount.

"If most Brits had half an idea of the amount going to waste, they'd be snapping up ugly veg by the trolley load," Oliver said. "There's no difference whatsoever in taste or nutritional value. This is perfectly good food that could and should be eaten by humans. When half a million people in the UK are relying on food banks, this waste isn't just bonkers - it's bordering on criminal."

Fruit and vegetables in Asda's new Beautiful on the Inside range will be bagged separately and sold for 30% less than their "perfect" peers, as the supermarket hopes to educate shoppers on the benefits of "buying ugly" while also supporting farmers. The campaign and dedicated range will launch in selected stores from 26 January, with a view to being rolled out nationally.

Shape up or ship out

In July 2009, a controversial EU ban on fresh produce (26 types of fruit and vegetables) that failed to match standard shapes and sizes - such as bent carrots, curled cucumbers and knobbly potatoes - was lifted. Up to that point, an estimated 20% to 40% of UK fruit and vegetables was routinely rejected before it reached the shops. But an expected deluge of wonky veg onto supermarket shelves failed to materialise.

The supermarkets blamed consumers for being obsessed with perfection, while farmers blamed supermarkets for sticking to rigid, high technical specifications. Retailers have gradually been relaxing these, and food banks and organisations such as Food Cycle have been grateful recipients of rejected produce. But successive reports on food waste in the supply chain show that much more could be done to make use of edible, if misshapen, foods.

Ian Harrison, produce technical director at Asda said: "Even if fruit and veg have some knobbles and blemishes, this doesn't affect the quality or taste - a carrot is still a carrot. Customers are simply looking for great-tasting, fresh produce at a value price. Our growers are savvy and already use a large percentage of this wonky crop for further processing, for things like ready meals and juicing, but we saw an opportunity to extend this even more."

In the first programme Oliver and Doherty meet farmers Olly and Kevin Hammond, who have been growing carrots and parsnips at Tattersett Farm in Norfolk since 1959. Doherty said: "Anything that doesn't make the grade gets chucked. It's a massive waste for farmers. Where 'A' grade carrots sell for £800 a tonne, they practically give the ugly ones away for animal feed for just £10."

The move is supported by the government's food waste reduction advisory body Wrap, which has said that loss and waste in the fresh produce supply chain averaged out at less than 10% but could be as high as 25% for apples, onions and potatoes.

Other large supermarkets such as Sainsbury's and Waitrose have relaxed their specifications to sell some ugly and imperfect produce, but this is the first initiative to clearly identify and separate them from the mainstream alternative. Emma Marsh, head of Love Food Hate Waste, said: "Buying misshapen or blemished fruit and vegetables doesn't mean you are sacrificing any of the taste. Food costs money and precious resources to produce, so we should value it."

Kiti Soininen, head of UK food and drink research at the market research company Mintel, commented: "It is clear that consumers are open to ugly produce, but where oddly shaped fruit and veg sits with mainstream offerings, it is at risk of going unchosen, even if subconsciously. Price comes across as a real consideration for many and positioning ugly fruit and vegetables as a tasty, low-cost option should help to reach this group."